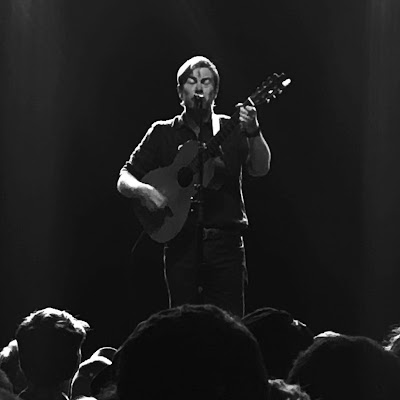 Bill Callahan kicked off another leg of his tour in support of this year's fantastic new album Shepherd in a Sheepskin Vest, his first album in six years, with a show at Webster Hall.

"We lost a good one. We lost a good one, David Berman. David had many friends and I was one of them." Bill Callahan took to the stage and uttered those words at his first show since the passing of his friend and then kicked off the show with a cover of Silver Jews' "Trains Across The Sea." Emotions were high for this one and it was clear that Bill was struggling at times to hold back tears. Still, it was another exquisite performance from the legendary singer that felt alive and triumphant. "Riding for the Feeling" was an early surprise and swiftly moved the mood of the crowd towards Callahan classics that would continue throughout the night. He was a bit more held back on stage at Webster Hall than he was at Murmrr Theatre, but when he did engage with the crowd, his banter was as brilliant as ever. "What was that floating thing? Oh, a single piece of confetti celebrating our return to New York." The set featured a wonderful selection from across his mighty discography and elongated versions made the night feel even more poignant than times in the past."America" and "Drover" were fit in between newer material like "747," "Circles," "The Ballad of the Hulk," and a lovely rendition of "Writing." Like he did earlier this Spring, Callahan went back to his Smog days and played a one-two punch that put the show at its absolute peak. "Let's Move to the Country" and "Let Me See the Colts" back to back was truly transcendent, the band impeccably locked in rhythm and Bill's encapsulating voice grabbing hold and forcing all feelings to surrender to the music and his words. His deadpan observances never let up as he announced "my dog's hair is in the microphone, somehow. It makes me lips quiver when I sing. It's disgusting." There was no real break, but after taking a moment or two to grab a music stand and some lyrics, Bill told the crowd "we're gonna do another Silver Jews song and try not to cry. Everything is just different without David" before breaking into "I Remember Me" for another heartbreaking, but remarkable cover. It was an incredible and honest performance, one from an artist at one of their most vulnerable moments who still made magic happen for few hours. So deep into a career, it's hard to find contemporaries for Callahan which only goes to prove how iconic his legacy stands against time. Having him back writing again is not just a great feeling for him, but for those who've listened to him for three decades it feels like the ultimate return home.
Posted by marc at 6:54 AM