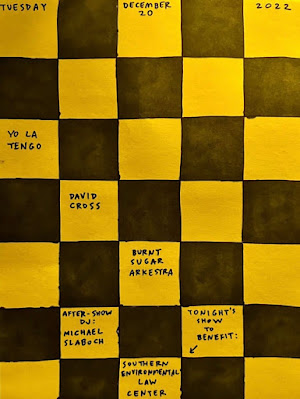 Per tradition, Yo La Tengo's 8 Nights of Hanukkah celebration at The Bowery Ballroom is a spectacular event that consistently lives up to its reputation.
For nearly two decades, fans of iconic indie rockers Yo La Tengo have been able to ditch their Hebrew calendars to learn the dates of Hanukkah each year and instead are able to look to the group's now customary eight-run show at The Bowery Ballroom to plan their yearly celebrations. Dating back to 2001 at Maxwell's in Hoboken, the event moved to Manhattan when the later club shuttered its doors, but the traditions have remained relatively the same: eight shows from Yo La Tengo, a different surprise opening act each night (both musical and comedic), new set lists, and no repeats. For night three of 2022, the band had support from Burnt Sugar Arkestra and David Cross (playing his character Rabbi Alvin Sugarman), plus a slew of guests for their main set. Despite being one of the greatest rock trios of all time, the Tuesday night show featured quite the impressive guest list of Lee Ranaldo, Bill Nace, and Ryan Sawyer which allowed the group to expand their sound into even more impressive territories."Turn On Your Love Light" was a rocking start to the night that got things moving and "Everyday" was another early highlight, Ranaldo's extra guitar pumping with noise that enhanced the track and set the tone for the night ahead. Seeing Ira and Lee on stage together was a true sight, the two guitar virtuosos combining their talents for moments of sheer bliss and sonic elation that made for a truly special evening. By now, Yo La Tengo are an institution of a band, one that has come to define a particular sound and symbolize a true force of music that has come through New York City. Much like the Velvet Underground and Dylan (both of whom they clearly admire and covered on this particular night) and their brethren in Sonic Youth, they've come to embody something beyond just a band, but are an art project of a higher magnitude. Their brilliant balance of noise rock and softer pop gems radiated with perfection on this occasion as Ranaldo would at times bow his guitar while Kaplan would dig deep for feedback, their ability to transgress genres and styles a true experience to witness. "Run Run Run" was a mind-blowing cover which rang-out with deafening volume and saw the band really embrace the extra musicians and their impressive onstage power which allowed for the song to explode with relentless beauty. The dueling drumming from Georgia and Ryan Swayer was another wonderful combo that helped anchor the cacophonous free-form guitar that Randaldo and Kaplan were unleashing on the ever-welcoming crowd. For some tracks, James McNew picked up his guitar as well and the triple assault from the three legends was truly something to behold and felt like a real moment for the ages. "Tom Courtenay" was another towering anthem that continued the band's masterful climb towards ear-splitting nirvana. For the encore, the band played a palette cleanser to debrief from the noise jam before inviting Lucy Dacus to the stage to cover Ronnie Spector's timeless "Walking in the Rain." Dacus, who has covered "Tom Courtenay" in the past, remarked about how she was a fan of the group and when they backed her for her own song "First Time," the grin across her face confirmed how memorable the moment was for her. As she's done recently on her own, the night ended with Dacus leading the band through a final cover of Carole King's "Home Again," an incredible night and just one of many that the band has in-store for their fans. In terms of annual holiday traditions, they don't get much better than this.
Set list:
01 "Turn On Your Love Light" [Bobby “Blue” Bland cover]
02 "Everyday"
03 "Demons"
04 "Let's Do It Wrong"
05 "Evanescent Psychic Pez Drop"
06 "Satellite"
07 "I'm on My Way"
08  "Paul Is Dead"
09 "Love Minus Zero/No Limit" [Bob Dylan cover]
10 "My Heart's Reflection"
11 "Run, Run, Run" [The Velvet Underground cover]
12 "Nothing to Hide"
13 "Tom Courtenay"
14 "Artificial Heart"
15 "Mushroom Cloud of Hiss"
--
16 "Take a Giant Step" [The Monkees cover]
17 "Walking in the Rain" [The Ronettes cover] (with Lucy Dacus)
18 "First Time" [Lucy Dacus cover] (with Lucy Dacus)
19 "Home Again" [Carole King cover] (with Lucy Dacus)
Posted by marc at 1:44 AM