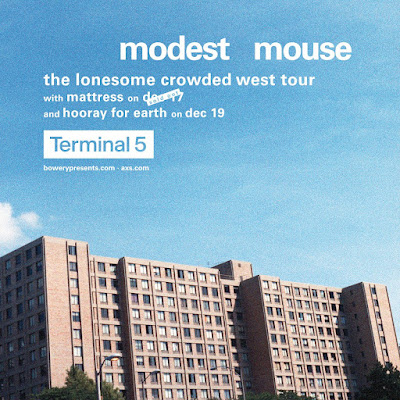 In honor of the record's twenty-fifth anniversary, Modest Mouse played The Lonesome Crowded West in-full at Terminal 5.
A lot has changed in the world of indie rock since Modest Mouse released their eternally brilliant sophomore record The Lonesome Crowded West. Over the past twenty-five years, the very idea and general sound of what comprises indie rock has shifted away from the brutalist tones, screams, and gnarly feedback that dominates their opus and to something that now has a bit more sheen and polish. Synths and clean, high-production values are almost more expected when listening to a new "indie" record in 2022 and long gone are the blasts of noise, lo-fi crackles, and jagged vocals which Modest Mouse executed with near-perfection on their landmark album, one that now feels like a piece of nostalgia that has been wonderfully preserved in carbon. A striking time capsule of the state of indie rock, and specifically Pacific north-west indie rock, from the end of the decade that not necessarily birthed the notion of indie, but came to define what it would stand for and sound like for generations to come. Or so I thought. After road testing the material on endless tours, the then young band of Modest Mouse was a burgeoning trio with high hopes of making a defining statement of a record that best encapsulated their life and surroundings. With touches of hunger, working-class identities, and determination to be more than what a hometown can come to define, Isaac Brock led his band through hardships, long drives, and helped to deliver an album that feels locked in to a moment in time. Indie rock doesn't currently sound much like anything heard on The Lonesome Crowded West, although there are moments in newer records where you can pick out an influence, but it's also impossible to imagine us getting here without this record existing. Sure, The Moon & Antarctica would follow and be regarded as their true masterpiece and "Float On" would breakthrough to mainstream rock radio and probably have more influence than the better work that proceeded it, but neither of those evens happen without The Lonesome Crowded West coming first. The post-grunge of the region coats the album in a layer of grime while the unhinged moments of punk also reverberate throughout and yet even with those distinct features, there's also the unique tones of Brock's vocals which make it a record that could only come from them. Like so many albums that get the play-in-full treatment, there's the emotional components of the record, the ones that draw you back to a particular time and place, that make the appeal of these shows so monumental and this record felt truly special. Clocking in at over an hour in length, the record is already a listening experience all on its own and seeing it brought to life only made it all the more spectacular. "Teeth Like God's Shoeshine" is an emotionally compelling song on its own, but when it kicks off an epic evening, its status rises immediately as one of the best openers of the '90s. "Convenient Parking" was another rocketing number that exploded with wild solos and a tremendous breakdown that let the band dig their heels into the grooves while replicating the recording with sheer precision. Each track unlocking a new memory, it was a solid nostalgic affair that built up the hype with each striking chord. "Doin' the Cockroach" into "Cowboy Dan" was a massive moment full of righteous rhythms that kept the crowd fully engaged while still balancing the more sentimental vibes. The album mid-point revealed the true fan-favorite song of the night as the opening strums of "Trailer Trash" sent the venue into a total trance. It's a song I, personally, had been longing to hear and when the time finally came, it felt even more exceptional than I could've possibly imagined. Strangers looked around to each and shouted the words with endless glee, everyone feeling a connection unlike before and uniting us all in a truly spellbinding moment. Everyone shouting "fake" slightly off-beat was transcendent and when the band broke the song down into a dizzying solo, it felt like the roof could blow-off the room as the joy radiated from the crowd with extreme force. As the album progressed, "Shit Luck" was an out of control number that erupted from the set-list with mind blowing power, the audience rupturing from a jolt of pure energy that took the night to a new level. Even after several tracks that continued to ride the wave of nostalgia, "Polar Opposites" once again ignited the room with another shout-along moment as the room belted out "I'm trying to drink away the part of the day that I cannot sleep away," a truly haunting, yet iconic, lyric that resonated deeply within so many and acted as a cathartic release as everyone exercised the collective demon in full unison. Over the years, Modest Mouse's reputation as a live band has been spotty at best, but for this tour, the band has pulled out all of the stops. No moment was underplayed and each song was treated with the utmost care, the band doing their best to bring these legendary tracks back to their remarkable, true form and leaving us all with nothing but the best memories of songs that already have so much meaning. We're lucky to add this to the long list of moments that make it special.
Set list:
01 "Teeth Like God's Shoeshine"
02 "Heart Cooks Brain"
03 "Convenient Parking"
04 "Lounge (Closing Time)"
05 "Jesus Christ Was an Only Child"
06 "Doin' the Cockroach"
07 "Cowboy Dan"
08 "Trailer Trash"
09 "Out of Gas"
10 "Long Distance Drunk"
11 "Shit Luck"
12 "Trucker's Atlas"
13 "Polar Opposites"
14 "Bankrupt on Selling"
15 "Styrofoam Boots/It's All Nice on Ice, Alright"
--
16 "3rd Planet"
17 "A Life of Arctic Sounds"
18 "Edit the Sad Parts"
19 "Grey Ice Water"
Posted by marc at 12:18 AM