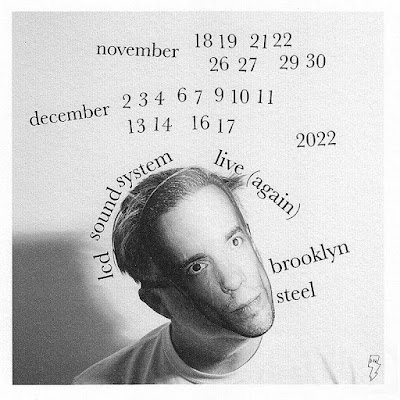 For the second year in a row, LCD Soundsystem have descended upon Brooklyn Steel for their  (seemingly) annual end of year residency.
For some there is Phish's run at Madison Square Garden for New Year's Eve, for others there is Yo La Tengo's Hannukah run at Bowery Ballroom. Some even attend Gov't Mule at the Beacon to close out the year. Now, music fans in New York City have another year end tradition to add to the mix: LCD Soundsystem at Brooklyn Steel. From Thanksgiving through the end of December, James Murphy and company have once again holed up at their partially owned venue in North Brooklyn to deliver festival headlining-worthy sets for a much more intimate crowd. Their typical mountain of gear assembled, the gang gathered onstage and unfurled their sprawling anthems of hardcore disco that immediately got the crowd pumping with energy and ignited the hottest indie rock dance party of the year. "Get Innocuous" thumped to life with pulsating beats that morphed into an early mirrorball debuting rocker which hyped-up the crowd with laser-sharp synths and pounding rhythms. "You Wanted a Hit" upped the ante, bringing the buzz even higher as the air-tight grooves picked up the pace moving the night into a dancing frenzy full of high energy and beaming lights. The band took us on a bit of a throwback for the throbbing "Tribulations" and booming "Movement," classic bangers that really emphasized the dance-punk nature of their core sound. An early highlight was the ever-cool "Daft Punk Is Playing at My House," the self-promotional hit that set the tone for Murphy's ever-brag-worthy lifestyle and choices that have given him the honor of being Williamsburg's reigning king of cool. "I Can Change" glimmered with spectacular fashion and "Oh Baby" was a fun surprise, an irregular in the usual set and an underrated track from their better than given credit comeback, American Dream. A few weeks ago, the band released their first single since their 2017 return, "new body rhumba," which fit in perfectly amongst their past hits, revitalizing the band's key sound for yet another victory lap. To wind down the main set, the band slowly eased into their first emotional number of the night, the always haunting yet cathartic "Someone Great," which always manages to hit the feelings directly on target while acting like a sort of balm, making for a soothing, yet moving moment. Fading out, the band struck the chords of Kraftwerk's high-water mark "Endless Europe," offering a special and touching tribute to the immortal electronic act that no doubt set the stage for LCD's existence. A sparkling transition that hit in all the right places before perfectly moving into "Losing My Edge," an all-time LCD move if there ever were one. As if Murphy's self-indulging monologue needed any kind of introduction at all, the opening notes to a Kraftwerk epic was a beyond fitting choice. "Home" closed out the opening set with another brush of disco pleasure. Despite an already phenomenal start, the pinnacle of every set is the incredible encore that climaxes with the three extraordinary tracks that have come to define the band. Their stunning tribute to the city they've called home for twenty years once again tugs at the heartstrings, it's aching tone an unofficial anthem for anyone who's called the city home at any point since the dawn of the new millennium. Next comes "Dance Yrself Clean," a song which continues to prove itself as the most incredible dance jam this side of a Daft Punk reunion. There's truly nothing quite like being in a jam packed room when that beat drops and the lights flip and all out pandemonium ensues within a crowd that is collectively losing their minds to the jaw-dropping musical display that has taken over the stage. Raw, absolute intensity crashes down as the band again digs into their hardcore inspirations for massive blasts of sound that eviscerates the possibility of any bad vibes. To bring it all home, "All My Friends" ignites the unbelievable feeling that only the song of a decade and an entire generation could possible accumulate. It's hard to describe the outright joy and transfixing pleasure this song can bring about and to witness it live is truly something for the ages.
Set list:
01 "Get Innocuous"
02 "You Wanted a Hit"
03 "Tribulations"
04 "Movement"
05 "Tonite"
06 "Other Voices"
07 "Daft Punk Is Playing at My House"
08 "I Can Change"
09 "Oh Baby"
10 "new body rhumba"
11 "Someone Great"
12 "Losing My Edge"
13 "Home
--
14 "Emotional Haircut"
15 "New York, I Love You but You're Bringing Me Down"
16 "Dance Yrself Clean"
17 "All My Friends"
Posted by marc at 1:05 AM