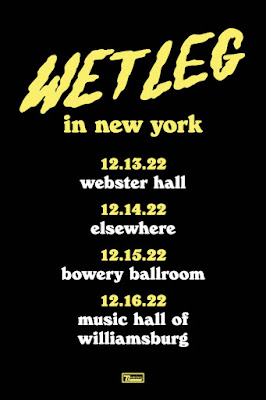 Buzz-band of the year, Wet Leg, are wrapping up 2022 with four sold-out shows across New York City and night two brought them to Brooklyn's Elsewhere.
Following their breakthrough single, last year's explosive "Chaise Longue," Wet Let stepped up to the plate of growing fame and knocked it out of the park with their debut, self-titled full-length album. Drawing both adoring fans and critics along the way, it was a banner year for the hot new band and their popularity seems to still be on the rise. Even with haters coming in to try and stifle the success of their supremely catchy tunes, it's hard to deny the earnest pop sensibilities on display throughout their album and while their performance comes a touch too close to a manicured look, the band can easily chalk that up to a year's worth of road testing these songs to death to the point where they've nailed their on stage demeanor with exact intentions. Signed before they even had written enough songs for an album, the momentum behind the band has been blossoming from the start, but as they close out the year, their stripes are clearly well earned and they look poised for the next level of their career. Of course with only one record to their name, it seemed a bit hard to justify the headlining status since their set doesn't even crack an hour, but every minute they're on stage is one rocked to the full potential. The jam-packed crowd was bubbling with excitement throughout opening act Gutaf's set which mixed the post-punk and dance grooves of acts like ESG, the Slits, and the Au-Pairs and cranked-up the vibes to set the stage for the buzzing British sensations. Brimming with total glee, Rhian Teasdale and Hester Chambers dazzled the amped-up crowd with their brazen guitar riffs and knack for charming pop tendencies that highlighted their tongue-in-cheek suggested sarcasm, with new suggestive deliveries. Infinite spin moves and Cheshire Cat smirks kept the band in full entertainment mode, their whit and charm never growing dull and constantly pushing the songs to new limits. During one moment of crowd banter, the band went around to ask each other if they were having a good time in New York and the bassist was quick to announce that "Joe's Pizza. is great. We've been here for three days and I've had nine slices. I love it!" The others also seemed equally excited that the legend had lived up to its expectation. After revving up the crowd, they played the lone new song and only non-album track of the night, the slow rocker "Obvious," which still felt like a natural fit with the rest of the material. "Who had a bad day? Who wants to exercise some demons?" the band asked before "Ur Mom" and when the moment came in the song for a collective release of deafening yells, the place erupted with ear-splitting screams and guttural shouts from the crowd. "Angelica" ripped things to shreds with angular guitars and a killer breakdown that had the room rocking and perfectly set-up their supreme anthem "Chaise Longue" for an inspiring finale. After breaking the band through that rode on internet success unlike we've seen in ages, Wet Leg are capping off a storybook year with a fantastic live show that proves they're more than a lightning in a bottle moment and ready for round two of their career.
Set list:
01 "Being in Love"
02 "Wet Dream"
03 "Supermarket"
04 "Convincing"
05 "I Don't Wanna Go Out"
06 "Obvious"
07 "Oh No"
08 "Ur Mum"
09 "Piece of Shit"
10 "Too Late Now"
11 "Angelica"
12 "Chaise Longue"
Posted by marc at 12:18 AM