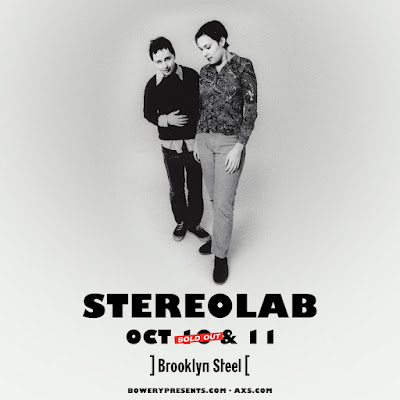 Stereolab brought their North American tour to New York with a pair of shows at Brooklyn Steel.
Even before their reunion in 2019, Stereolab have always sounded like they're playing to an audience in another dimension. Their music, an instant shock of retro-future nostalgia, has a spectrum of sound unlike so many other bands that their range is near impossible to pin down and with a catalogue so vastly deep, becoming a committed fan takes work. Drawing from Latin jazz, dream-pop, krautrock, prog, shoegaze, noise-rock, French new wave soundtracks, lounge music and more, their eclectic canon of interstellar compositions not only pops with technicolor wonder on record, but blossoms with breathtaking energy on stage. Of course with such an extensive discography, set lists can be divisive. When the group first reformed just before the pandemic, they gave their fans what they craved and stuck to some of their most illustrious hits that sizzled with synth-pop splendor and magnificent motorik rhythm. This time around, however, the band dug deep and pulled out some of their most impressive gems to make for a truly dazzling evening that catered to their more passionate and dedicated fan base. Avoiding some of their biggest and most well known records completely, this was a show for those who've devoted their time as a listener and were rewarded with some mesmerizing performances. "Low Fi" had steadfast rhythm and a humming groove that gave the show its pulse for the night, giving a slight rush to their developing vibe and setting the bar high for the neon tones and laser sharp beats the band would continuously unveil throughout the night. "This is the part where we do the mini-epic in four parts, 'Refractions in the Plastic Pulse'" announced Lætitia Sadler as the band dove into the full, seventeen-minute version of the track, something that they've only done for the first time on this tour, and delivered an absolutely transcendent and hypnotic jam soaked in heavy reverb and spiraling guitar solos. Each part flowed with stunning precision, the band sounding sharp and well in-tune with one another, ready to delve into the cosmos and produce tracks you'd expect the Jetsons to listen to while dropping acid. "Here comes 'Harmonium'" Sadler proclaimed with joyful enthusiasm, almost as if she had delighted herself with the news, as the band locked-in to a tight groove and proceeded to unleash shimmering swells of billowing fuzzed-out guitar coated with droning synths and washed-out melodies. "Super Electric" was another blown-out triumph which saw the band again swoop into noise-pop bliss and shoegaze walls of sound as they cranked out the track with pure, heavenly distortion. For the encore, the band played a turbo-charged "French Disko" that nearly blew the roof of the venue, the sound turned up to eleven, and the band playing as if they were blasting out the soundtrack to a ride through hyperspace. The band immediately transitioned into the freak-out drone jam "Simple Headphone Mind" and continued to build the tension to an astounding height before exploding with pure euphoria. Stereolab have never fit into any mold and on their reunion tour continues, they're not showing that they're not just back to play the hits, but rather pull out the deep cuts from their plethora of mini albums, EPs, and compilations, further proving their refusal to be anything but themselves. However just like a comet on which you'd expect them to have a galactic residency, they only come around every few years and you never want to miss out on a chance to see something special.
Set list:
01 "Neon Beanbag"
02 "Low Fi"
03 "Op Hop Detonation"
04 "Refractions in the Plastic Pulse"
05 "U.H.F. - MFP"
06 "Miss Modular"
07 "Mountain"
08 "Delugeoisie"
09 "Harmonium"
10 "I Feel the Air (of Another Planet)"
11 "Pack Yr Romantic Mind"
12 "Super-Electric"
--
13 "The Free Design"
14 "French Disko"
15 "Simple Headphone Mind"
Posted by marc at 12:44 AM

Email ThisBlogThis!Share to TwitterShare to FacebookShare to Pinterest
Labels: Stereolab