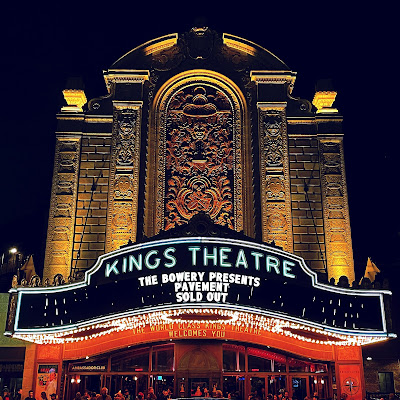 Pavement have returned to New York City for the first time since 2010 and their second reunion tour highlights their greatness and their enduring legacy that is still influencing bands to this day.
There's no band that embodies and defines '90s indie rock like the iconic quintet from Stockton, CA. Pavement have built their legacy around their five albums released between '92 and '99, perfectly framed right in the last decade of the twentieth century and as their cult status blossomed with the explosion of the internet in the new millennium, the band's second reunion tour once again recaptures the band's pristine legacy and confirms their status as legends is worthy of their beloved and devoted fandom. I missed out on their first reunion go around in 2010, but was elated to catch them as part of their residency at Brooklyn's King's Theatre even though I caught the show where they skipped the namesake of my newsletter, it was still an inspiring set from these true indie gods. "Major Leagues" was a sublime opening number that beautifully ushered in the night of deep cuts, fan favorites, and all out classics for a night of total elation and communal joy. "Two States" and "Stereo" featured massive shout-alongs from the crowd that got the night pumping with energy as fans jumped along to the driving hits. "Real heads will know, that's the first time I've gotten the words right to that song," Malkmus said after they played the algorithm-made-famous track "Harness Your Hopes" which the crowd cheered for as the rest of the band laughed."Cut Your Hair" was a raging classic and Malkmus really let loose with a blazing solo that made the crowd cheer with unbridled enthusiasm. The band's relaxed yet locked-in melodies were equally rocking as they were jammy and the band's expanded grooves highlighted something they never quite captured on record. The enduring love for Pavement has been going strong for thirty years and every bit of the show was an easy reminded at just how that love has been sustained since the early '90s. The camaraderie that comes with hearing a beautiful room full of people sing back these heartfelt hits was triumphant and life affirming to the point where you just couldn't wait to hear what they'd play next from their deep catalogue. When the band hit the incendiary portion of "Range Life" where the crowd shouted back the seismic phrase "don't worry, don't worry, we're in no hurry" it felt transcendent, a unifying moment of total bliss, and a cathartic performance that cemented the night as one of the best of the year. "Spit on a Stranger" was an exciting part of the encore and Stephen briefly teased "AT&T" before concluding with a blown-out "Summer Babe" that rocked the building to its core, the crowd spiraling into euphoric states of mind that was exemplified by the force in which the band dished out the rocking opener to their debut record, which in a way set the tone for the band's sound in all the ways to come. A torn apart "Stop Breathin'" brought the night to a finish and the band really tore into it, ripping out one final breakdown and guitar squall to give the crowd one last dose of lo-fi indie brilliance. Twelve years after the band first decided to hop on board the reunion train, their second trip furthers their legacy as one of the most solid American rock bands of the '90s and highlights their influence in the two decades since, a defining group of the era and ones who belong amongst the all-time greats.
Set list:
01 "Major Leagues"
02 "In the Mouth a Desert"
03" Two States"
04 "We Dance"
05 "Harness Your Hopes"
06 "Cut Your Hair"
07 "Heaven Is a Truck"
08 "The Hexx"
09 "Frontwards"
10 "Home"
11 "Stereo"
12 "Kennel District"
13 "Range Life"
14 "Folk Jam"
15 "Embassy Row"
16 "Fight This Generation"
17 "Here"
18 "Blue Hawaiian"
19 "Motion Suggests"
20 "Unfair"
--
21 "Spizzle Trunk"
22 "Spit on a Stranger"
23 "Gangsters & Pranksters"
24 "Summer Babe"
25 "Stop Breathin"
Posted by marc at 12:24 AM

Email ThisBlogThis!Share to TwitterShare to FacebookShare to Pinterest
Labels: Pavement