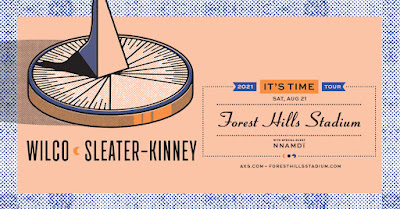 While the We Love NYC Homecoming Concert across town was cancelled due to weather, Sleater-Kinney and Wilco managed to play abridged sets as part of their rescheduled It's Time summer tour.
I had every desire to write an long-form piece about how I waited an entire year to see this double-headlining show from two of the best American rock bands for over a year on a perfect late-summer evening in Queens. However, with a hurricane on the way, the night was a near wash with Sleater-Kinney only being able to play for about half an hour and then me watching the majority of Wilco's set through a doorway under the grandstands of the arena. It was clearly a let down and a disappointment, but after a year and a half of missing shows, I wasn't ready to give up so quickly.
"It's not the summer we were promised. It's the summer that we deserve." It's a cruel line, but it feels more true than ever as of late and it was an unfortunate on the nose moment during what turned into a shortened set from Sleater-Kinney. "No one is thinking about the weather, right?" said an eager Carrie Brownstein not too long into the set which featured mostly post-reunion tracks from the iconic rockers with a heavy focus on their last two albums. Backed with a stellar ensemble of musicians, Brownstein and Corin Tucker eased into the show and were really finding their rhythm when they were forced to rush offstage as heavy rain began to ascend upon the outdoor venue. However, in the songs leading up to the moment, the new formation of S-K were true to their history and stormed the stage with serious attitude and conviction. Brownstein through in some stellar high-kicks when she wasn't too busy toppling over during solos and Tucker's voice sounded remarkable, nailing each track with studio-like perfection. "Jumpers," "Price Tag," and "New Wave" were all total killers, their shredding really hitting home in the stadium-esque surroundings and had their set continued, it seemed like they were on their way to winning over anyone who was only in attendance for Wilco. On their second outing without long-time drummer Janet Weiss, the duo seem to have found their footing and are operating with a re-established confidence and it was such a shame that their set had to be cut short just as they seemed to be picking up steam.
After a rain delay, Wilco headed out amidst some moderate showers and brought Brownstein and Tucker onstage with them to open with the most appropriate track in their catalogue, "Shot in the Arm," and one that was also part of the tour-exclusive split 7" the two bands had for sale (Wilco covered "Modern Girl"). Even with the late start, Tweedy proclaimed "we're just happy we can play as many song for you as we can" and later as the rain intensified reassured the crowd "we're gonna play until they tell us to stop." The weather was brutal, but the crowd was determined to stick it out and for those who withstood the elements, they were rewarded with an intimate performance from a legendary band. Nels Cline thrashed solos on "Art of Almost" and "Impossible Germany" that took on the rain in a competition for who could display more power. The night was mostly packed with fan favorites and newer jams like "If I Ever Was a Child" which felt totally innocent in a light drizzle while "Jesus Etc" was like a rebirth in downpour. It was a cleansing moment and a true highlight of the evening. "I am Trying to Break Your Heart" came to life with wonderful textures and "Heavy Metal Drummer" was another stunner and absolute crowd pleaser. "It's not every day you see that kind of guitar in the rain" remarked Tweedy late into the set. "Nels, if you step into the rain with that, it'll be the most Prince-thing you've ever done" he continued with a rallying approval from the soaked crowd. With a discography so rich and full of brilliant songs, a typical Wilco concert can feel too short and deprived of some essentials so there is no doubt that one cut short due to an imposing hurricane wouldn't feature nearly as many quintessential songs as you'd hope, but after so many months of being deprived of live music, even abbreviated shows are moments worth experiencing.
Sleater-Kinney:
01 "High in the Grass"
02 "Hurry On Home"
03 "Price Tag"
04 "Down the Line"
05 "Jumpers"
06 "Shadow Town"
07 "Can I Go On"
08 "Path of Wellness"
09 "A New Wave"
Wilco:
01 "A Shot in the Arm" (w/ Sleater-Kinney)
02 "Random Name Generator"
03 "At Least That's What You Said"
04 "Love Is Everywhere (Beware)"
05 "I Am Trying to Break Your Heart"
06 "Art of Almost"
07 "If I Ever Was a Child"
08 "Impossible Germany"
09 "Hummingbird"
10 "Everyone Hides"
11 "Jesus, Etc."
12 "Theologians"
13 "Dawned on Me"
14 "I'm the Man Who Loves You"
15 "Heavy Metal Drummer"
16 "Box Full of Letters"
17 "I'm Always in Love"
Posted by marc at 9:57 AM