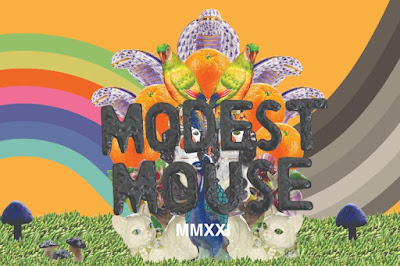 In support of their first album in six years, Modest Mouse came to New York City for a four night run at Brooklyn Steel.
There's Classic Rock and then there is classic indie rock, the later of which Modest Mouse can without question embody. From the mid-'90s throughout the early 2000s, there weren't many other bands that could carry the torch of the underground into MTV rotation quite like the Pacific-Northwest heroes. Issac Brock and company took their basic approach to indie rock which included everything from tight jams to hellacious screams that magnified his voice to levels way beyond even his own wildest dreams. On their first tour since the start of the pandemic, Modest Mouse seemed ready to out perform their past selves, igniting each show with strong valor and compassion that no one could question the band's excitement to unleash the hits. On their second consecutive show in Brooklyn, the band wasted no time getting to the dirty work of arranging a career-spanning setlist that would put so many other artists to shame. It was clear that the band would use this residency to pull out all the tricks in their repertoire and that no concert would be exactly like any of the others. A large portion of the night came from their latest, The Golden Casket, and the new singles "We Are Between" and "Leave a Light On" were met with welcomed response, however it was older favorites that really made for the evening. "Black Cadillacs" into "Gravity Rides Everything" felt like the highlight of the evening as the two classics segued with absolute perfection and the later really capturing the group at their peak. There were many moments that seemed to be emotional and sentimental journeys for those in attendance and hearing the comfort of The Moon and Antarctica classic was not one to be ignored. "Doin the Cockroach" and "Out of Gas" were two stunners from the '90s that sounded every bit as exciting, earnest, and genuine now as they did decades prior, again confirming that status of indie rock veterans. "Paper Thin Walls" was a wonderful surprise and again brought back some of their more quintessential moments that really amped up the crowd and one that set up the audience for "Bukowski" and "The Devil's Workday" with such confidence and swagger that it was hard to not want get more embedded with the crowd. Modest Mouse can get intense and heavy at times, but their set was such a solid balance of composure and rawness that it was hard to feel underwhelmed by the new songs when you perhaps wanted to hear nothing but the hits. "Dashboard" brought home the highlights from their last major brush with radio success, but kicking off the encore with their oldest jam, "Dramamine," really set off the spark for their most diehard fans. For a band that hit it big so late into their already well-respected underground career, Modest Mouse have seemed to defy the odds. They've maintained their status as a band on the bigger stages and top lines of festivals and still play the bigger venues of major cities despite not ever capturing the magic like they did once back in the middle of the aughts with a song not even guaranteed to make their set list these days. If that's not the ultimate indicator that a band can graduate to major status while also keeping their identity as a key band in indie rock, I don't know what is. Luckily for us, Modest Mouse is here to forever be a band loyal to fans and one that's ready to turn on the jams and win over a crowd just when you might not expect it. Over the past 30 years, few have kept the hype like this bonafide indie rock band, but there are also few who can even compare or rival the level onto which they've climbed.
Set list:
01 "Night on the Sun"
02 "We Are Between"
03 "We're Lucky"
04 "Black Cadillacs"
05 "Gravity Rides Everything"
06 "The Sun Hasn’t Left"
07 "Doin' the Cockroach"
08 "Pups to Dust"
09 "Out of Gas"
10 "Leave a Light On"
11 "Paper Thin Walls"
12 "Bukowski"
13 "This Devil's Workday"
14 "Fuck Your Acid Trip"
15 "Dashboard"
16 "Back to the Middle"
--
17 "Dramamine"
18 "Japanese Trees"
19 "Spitting Venom"
Posted by marc at 8:17 AM