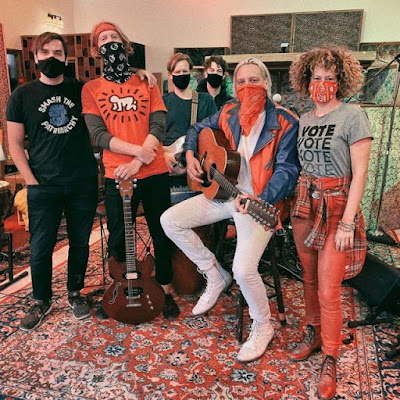 Arcade Fire were the musical guest with Stephen Colbert on Election Night this week and they performed a new song, "Generation A."

It's hard to think of a definitive sound for Arcade Fire. The early baroque-pop of Funeral has all but disappeared from their latest records and the unfortunate event of Everything Now left many think the band had hit their creative peak with no new heights in sight. "Generation A" definitely follows the synth-heavy bombast of their last two records and it still feels like Win Butler is trying to figure out how to adapt the political sides of the Clash into his own band, but "Generation A" feels like they're headed in the right direction. There isn't an anthem-worthy chorus that is found in their best work, but this one is a far cry from the speak-sing tragedies of their last album. Right now, our country is in turmoil and we are all hanging on to every last bit of hope that something will turn out OK. Arcade Fire aren't going to be the ones to save us from this disaster, but this is a small sign of hope that something good might be on the way.

When someone on the Internet, they would like to read / write e-mail, chat with friends, read and post / reply comments, play fun games. As a internet marketing goal is to build a top priority for Internet users. Offertes aanvragen