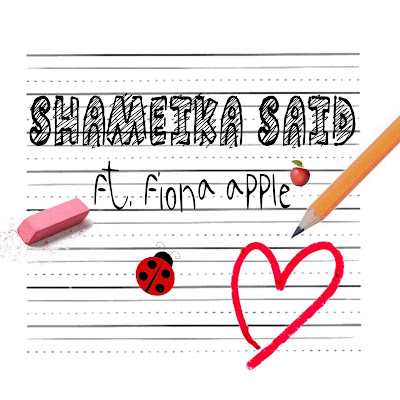 On Fiona Apple's immaculate Fetch the Bolt Cutters, she name checks a girl from her past, Shameika, that told her she had potential and influenced her future. Well, Shameika has been rapping for decades and collaborated with her former childhood schoolmate on a brand new track.

"Shameika Said" floats along a funky bass line and interpolates Apple's song with new bars from Shameika herself. It's a solid groove and one of the most unlikely, yet exciting, collaborations of the year. After being thanked for giving her the courage and motivation at an early age, the two lost touch after school, only to reunite this summer. Turns out, Shameika is not only a real person (not just a figment of Fiona's imagination), but she remembers Fiona, the incident in the cafeteria, and has been a rapper for the past thirty years using monikers like Dollface and Chyna Doll. The reunion was sparked when their shared teacher from elementary school sent a letter to Shameika telling her that her old classmate had not only mentioned her in a song, but named the song after her as well. The two then reconnected over FaceTime and ultimately collaborated on a track together with Fiona rerecording her lyrics to fit the vibe of Shameika's track. The whole interview is a wonderful read and incredible reminder on how the power of kindness can truly transcend and make a lasting impression.