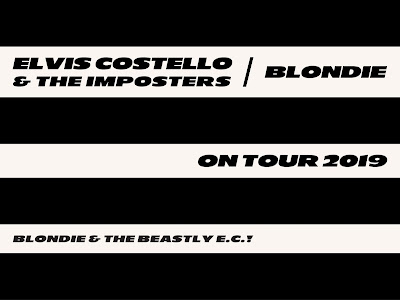 The epic double-bill of Elvis Costello and Blondie came to Queen's Forest Hills Stadium on a supreme summer evening.

It was a nostalgia filled night out in Queens as two legendary acts brought hits filled sets to a packed house on a near perfect summer night. Blondie kicked off the night with an (extremely) early set that began with "One Way or Another" and proceeded to raise the bar throughout their time on stage. Debbie Harry is still putting on a pretty great show and they did a wonderful job of balancing their classics with some relatively newer songs. "Rapture" sounded electric and after some flashy solos the band did a seamless transition into Lil Nas X's summer smash "Old Town Road" which felt every bit as weird as it sounds, but proved that Harry still knows how to rev up the crowd and many unsuspecting fans rose to their feet to help celebrate the song that has been reigning high over the charts for the past several months. She shouted out the club kids a few times and once again broke out another cover, but this time it was a bit more of a throwback as they melted into Dee-Lite's "Groove Is In the Heart." "The Tide is High" saw more cheers from the crowd and "Heart of Glass" brought the house down. To finish out their set, the band closed with "Dreaming" as Debbie Harry led the crowd through a chant of "Dreaming is free! We're all free!" It was a great way to start the night and a perfect reason to get to the show early.

After an incredibly quick set change, Elvis Costello and the Imposters crashed right into "Pump It Up" which jolted the crowd back out of their seats and helped set the mood for the final set of the night. Elvis and his band were tight and his two back-up vocalists and some seriously impressive voices, but his set felt a bit flat in comparison to the hometown heroes of Blondie. Of course as the hits came back into the mix, the crowd re-energized and the band really played off of the reactions. About halfway through the set, "Watching the Detectives" began to play and this felt like the turning point of the night. Elvis really leaned into his guitar and emphasized his punk roots which made things feel much more compelling and gave a much needed boost to the night. He bounded jokes off the crowd all night and his spirits were high which translated well across the stadium and as time got close to curfew, he really kicked things into gear. "Every Day I Write the Book" was a true highlight, again his vocalists really delivering some sensational work, and from there it was a beautiful and melancholy rendition "Alison" that really felt like the pinnacle of the evening. To bring things to an end, his band blasted into "(What's So Funny 'Bout) Peace, Love and Understanding" which felt like the most rocking number of the show and was a perfect way to close out a night that felt a bit like a nostalgia trip, but well worth the trek to the edge of Queens.

Elvis Costello and the Imposters: