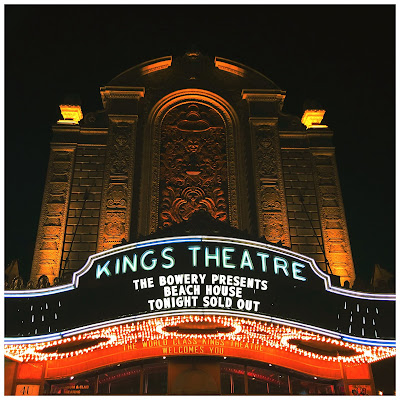 Beach House brought their current tour to Brooklyn in support of their latest, and perhaps greatest, record, 7.


Over the past decade, Beach House has evolved from a band making excellent bedroom-pop to a band ready to take over the furthest reaches of the galaxy. While their earlier records felt tight and compact, their latest output feels primed for the cosmos, the soundtrack to the deepest adventures along the Milky Way. Taking dreamy, atmospheric pop to new heights, the duo of Victoria Legrand and Alex Scally haven’t changed the nature of their songwriting, but have expanded their creative output into something larger than life. On stage, the band (now with a full-time drummer) have accentuated their sound and scaled it to fit rooms beyond some of their wildest imaginations. However, taking over the opulent Kings Theatre felt not only natural, but a move well within their musical grasp, their sound translating better than one could possibly imagine. Gauzy synths crept to  unprecedented heights and seemed to release absolute beauty giving way to truly sublime moments that captured the essence of the band in a way that seemed unimaginable on record. Live, the songs took on new identities and really seized the moment and excitement exuded by a live audience. The sound was rich and full of texture and was given a new depth, not just from the twinkling backdrop, but also from the band's intriguing and passionate composure. Watching Victoria lurch over her keyboard while swirling her hair in the mightiest of headbands was an enriching sight that acknowledged the power and weight of these lush, swelling songs. The majority of the show was backlit, giving the band a protective shadow which added a new element to their already mystical sound. As lights shimmered behind them, a screen gave way to Rothko-esque backgrounds of bold colors that felt empowered by the band's illustrious sound. As expected, the set was focused mostly on their newer material and new tracks like "Lemon Glow," "Dark Spring," and "Woo" felt particularly magical in such an ornate space, the dream-pop sound feeling more inherent than ever, and carrying the celestial weight an order of magnitude high above anything they've ever done prior. Of course, classics like "Myth" saw the biggest reactions of the night and created elegant moments of sparkling brilliance that only Beach House can conjure. As the night crept on, the shoegaze bliss of "Sparks" felt the volume increase throughout the theater and catered to some of the most majestic moments of the evening as spellbinding guitar lines transfixed the crowd and led to some of the most euphoric and emotional peaks of the night. Perhaps the only gripe, was that at this point in their career, Beach House has such a deep catalogue that hearing all of the hits is near impossible, so  while the lack of songs from Devotion and Teen Dream was a bit disappointing, it's hard to think of a song that didn't belong on the set list and that is perhaps the truest testament to this band. Their work is staggering and filled to the brim with gems. Each album has felt like an unexpected step forward while always remaining true to their sound. Nothing here felt unexpected or unwarranted and just before the night came to a close, Victoria shouted out "four more hours" and it felt like she was even in on the fact that everyone could stand to hear more from this truly exceptional group. Closing with "Dive" still felt like a transcendent moment and a real triumph as the song hit its mid-section and everything fully clicked into place. It was one final moment of pure magic that seemed to suspend reality just long enough to allow the crowd to drift off into ethereal bliss before returning back to Earth.