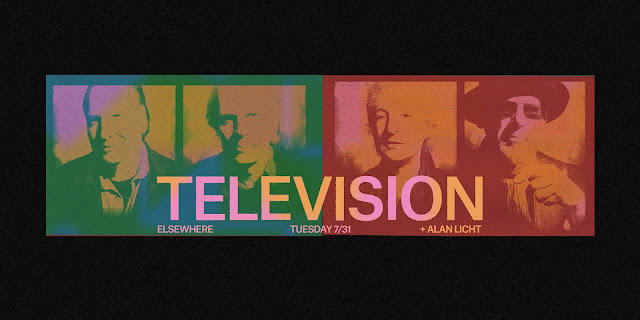 New York legends Television brought the hits to a packed house in Bushwick for a Tuesday night of proto-punk passion.

These days, it doesn't feel quite right to call Television shows reunions as they've been playing together again, albeit sporadically, for over a decade. Still, any chance to catch these elder statesmen doing what they do best is not something to miss. With a solid one-two punch of "Venus" and "Elevation" to kick off the night, the band blazed through a set drawn from their classic, jazz influenced rhythms and spellbinding guitar work which proved that forty years after releasing their debut record, Tom Verlaine and company can still bring the heat and dazzle a crowd. The dueling guitars that weave together to create a stunning composition of experimental jams are held together with eccentric drum fills and are just as impressive today as they were amongst their peers at CBGBs. Taking some experimental cues, the band played some elongated jams that featured some great distortion and powerful displays of control and mastery of their craft. It's no wonder they've become such legends and their work truly speaks to their ability to now only write classics, but transform these songs onstage into something even more inspiring than their recorded versions. Of course, it was the hits from the band's landmark album, Marquee Moon, that really got the crowd hyped up and hearing these classic songs live and played with such a dynamic force was truly special. "Prove It" and "Torn Curtain" saw the crowd chanting along with the band and "See No Evil" was a revolutionary moment that showcased a propulsive guitar solo that filled the crowd with pure admiration. The band was grouped in with the punk scene of the city in the '70s, but while their peers in the Ramones blasted power chords and anthems under two minutes, Television took the liberty to stretch out their hits well beyond the ten minute mark, nixing the notion that punk had to be a rush of sonic melee and rather something that could be marveled for craftsmanship and style. Their set featured ten songs in just under two hours. Closing things out with the elaborate and sensational "Marquee Moon" was a total dream and really allowed for their talents to shine through onto the crowd. Just towards the end, Verlaine broke a string which caused for a bit of an underwhelming let down, but the band would return minutes later and redo the classic, giving it new life and playing with accentuated vigor that not only redeemed the first version, but actually lived up to the anticipation that comes along with a song of such stature.

Email ThisBlogThis!Share to TwitterShare to FacebookShare to Pinterest
Labels: Television