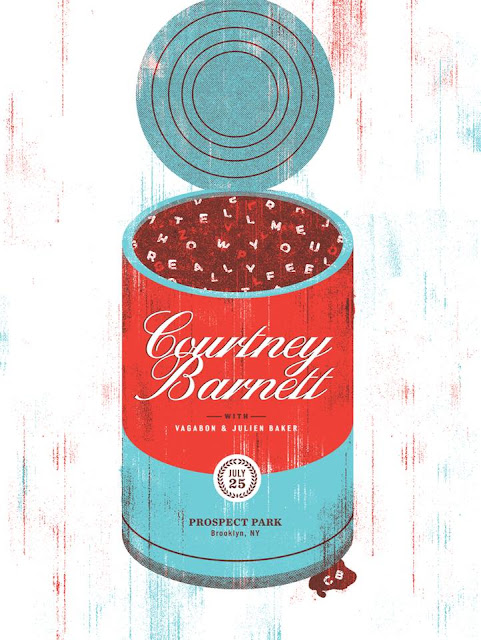 On a grim and wet Wednesday evening, Courtney Barnett headlined a soggy Prospect Park in support of her latest record, Tell Me How You Really Feel.


All day, a darkness loomed over the city as bold clouds hung low in the sky and a thick blanket of humidity hugged everything within reach. A light mist turned into a heavy drizzle as Julien Baker took an earlier time slot in the evening than expected and began to woo the crowd with her stunning elegance. Last year's entrancing Turn Out the Lights ranked amongst the best, but the bumped up and brief set barely let her come into focus. Standing alone in the middle of the stage, Baker exposes herself to the crowd in the most vulnerable of ways, her voice a beacon through her striking guitar. Her presence on stage was magnetic with all attention directly on her every move and her facial expressions make it perfectly clear that she is just as committed and in the moment with her songs as her fans. Just as she closed with "Turn Out the Lights," the crowd jeered for her triumph but it came to an end all too soon. After such a short set from Julien, Courtney Barnett took the stage just past 8:00 and revved up the crowd with her all thrills and no frills attitude and straight-shooting guitar work. She kicked things off by diving straight into her latest record and played the first three tracks in sequential order, before adding in a healthy mix of tracks from her excellent full-length debut to change things up a bit. Her lyrical wit combined with her slacker-rock vibes offer up a solid sound that comes across with the same charming, yet defined guitar tones when brought to the stage as they do on record. Barnett's a wordsmith through and through and watching a crowd sing along to off-kilter, yet linear storylines helped mask the rain that never ceased throughout the show. She stuck straight to all of her song's utmost integrity too, never dragging on a solo or enlisting the crowd for extended singalongs which showed a sign of true maturity and confidence that her music can speak for itself and doesn't require anything beyond its initial power. She embodies and reinvigorates that classic, blown-out indie sound of distorted guitars and steady rhythms, that fills the void needed in modern rock. Hearing Margret Atwood quoted in a fuzzed-out anthem isn't something one is lucky enough to hear every day, but getting to scream out "men are afraid the women will laugh at them / women are afraid that men will kill them" as the rain poured down, was a true moment to remember. "Depreston" felt intimate and seemed to halt the rain just long enough to create a mist and gave the night an extra shine. "Pedestrian at Best" closed out the night and really saw Barnett go for the big closing number (which she nailed) as she slammed on her distortion and waved her guitar through the air like a conqueror set out to declare their reign. The night seemed to flash by, no doubt cut short due to rain, but it was an empowering evening none the less of blissful rock and roll.