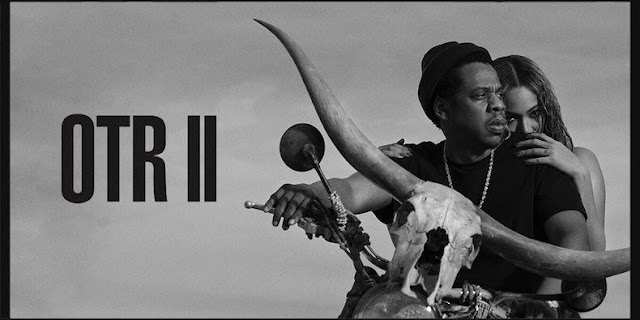 Torrential downpour and lightning delayed the start of the reigning king and queen’s On The Run II, but when they finally took the stage, they asserted their dominance and almighty power.


The words “This Is Real Life” lit up massive screens and images of the couples life illuminated the stadium. After an hour and a half delay, the anticipation was insurmountable and the royal couple delivered an impressive set of killer hits. With extreme poise and grace, Beyoncé was without question the main act with her husband, Jay Z ,taking shotgun next to her incredible headlining performance. Clutching their hands as they graced the crowd with their presence, they made their love known and supported each other throughout the night. Opening with “Holy Grail,” it was surreal to hear Bey take on Justin Timberlake’s part and sing the lyrics to “Smells Like Teen Spirit” and it was an instant win to watch them bust out "'03 Bonnie & Clyde" and "Drunk in Love" so early on in the night, immediately setting the bar high and proving the night was going to be well worth waiting it out in the rain. The movie images helped to portray their story of a gangster and a queen, their relationship appearing stronger than ever. It was an absolute spectacle with pyrotechnics and levitating stages transforming the stadium into their palace. The hits were plentiful, "Big Pimpin'," "Dirt Off Your Shoulder," and "Song Cry" from Jay and "Diva," "Naughty Boy," and "***Flawless" from the Queen. Alternating between their two catalogues, the peak of the night was without question Bey’s renditions of “Countdown” and “Sorry” followed by Jay’s “99 Problems” which featured famous celebrity mugshots and brought the stadium to their feet in a moment of pure pandemonium. Not to be outdone by their songs alone, Bey's costumes were, well flawless, and her dancing is still a sight to see and carries to the masses. She wore a royal yellow ballgown as she unleashed a breathtaking "Rendition" and allowed her voice to shine as bright as her soul. As the night came to a close, Bey kept on slaying as she dazzled with the classic "Crazy in Love" and continued her reign with a powerful performance of "Freedom." Their showmanship was magnetic and it’s hard to imagine a more high caliber act than these two together on stage. “Forever Young” was another highlight of the night and again offered rare views into their life. To close the night, they launched into their recent jam “Apeshit” which again brought the night to a new level of excitement. It was an epic night with the two firmly seated on their throne of excellence.