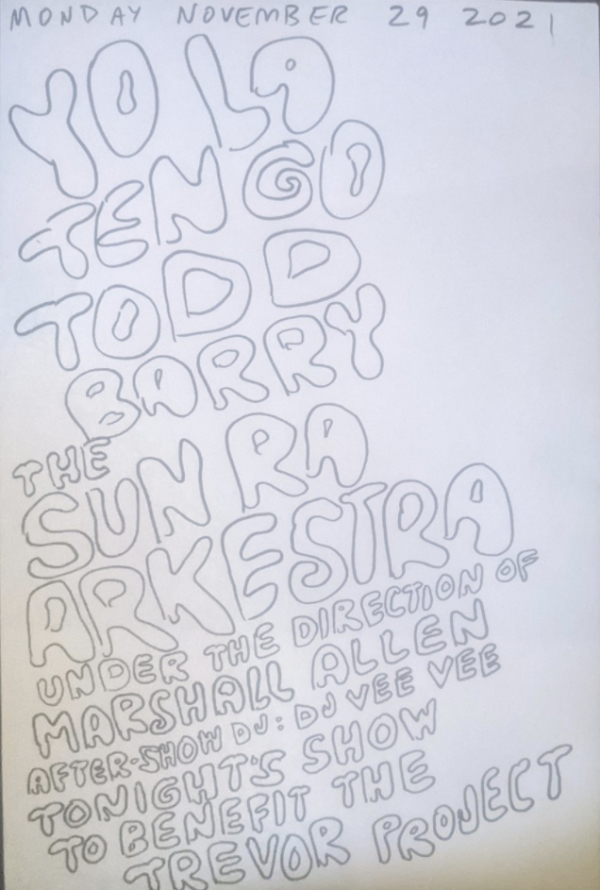 The Hanukkah shows from Yo La Tengo return to Bowery Ballroom this year after a hiatus due to the pandemic. The band, however, sounds as fresh as ever.
Seeing Yo La Tengo play their iconic Hanukkah shows feels like an indie rock right of passage. The allure of a quintessential band playing the closest they get to hometown shows for the holidays with a special guest opener each night has become a rather legendary experience and it is so great to see the trio return to Bowery Ballroom for the occasion. Night 2's surprise opening set came from none other than the Sun Ra Arkestra and comedian Todd Barry (the only other act to play each year along with the band themselves) and it was an interstellar night of cosmic wonder. The Arkestra beamed in from space and played for just an over an hour combining brilliant free-jazz and psychedelic sounds for a captivated audience. It was a remarkable set and put the bar high for the main act to follow. Luckily, Yo La Tengo are also veterans and they took to the stage and played a wide variety of songs from their discography that capture more of their slower, mellow tunes. Hitting on a lot of acoustic numbers, the group slowly eased in to their set, moving at their own pace as delicate vocals danced over simple song structures. Occasionally we were hit with loud bursts of distortion and it was stunning to watch the group shift so effortlessly between genres without losing hold of the show. They were tight, but also loose and easy with their melodies giving a much more relaxed feel than the mind-blowing solos unleashed by their openers. However, that quickly changed when the jazz legends returned and joined Yo La Tengo for an unforgettable run of songs that combined their powers for an epic, jazz-rock explosion that will be hard to forget any time soon. With five horn and brass players now on stage, the band took their sound in a whole new direction and put their remarkable talents on display in a brand new light. Seeing their pivot from noisey shoegaze to lounge piano ballads to blown-out spiritual jazz renditions was pure genius and unlike anything I have ever seen. Together, the bands hit a stride that felt at once natural and also like an of-the-moment out of body experience. The crowd roared with excitement every time a solo leaped off the stage and it was clear how much the bands were enjoying their moments together as well. The Hanukkah shows are known for their spontaneity and this performance felt like one of the more exciting collaborations they've brought to the stage. At one point I thought to myself, I could listen to an entire album of these two groups feeding off each other and never grow tired of the direction the music travels. It was such an unexpected, but truly moving sight to behold. For the encore, the trio returned to drop some covers from Blue Öyster Cult, the Ramones, and the Cramps to once again reaffirm their wide range in taste and while it was great to hear more of their punk side, it still couldn't hold a candle to the interstellar display we had been lucky enough to witness only moments before. A true miracle of Hanukkah and one for the books.
Posted by marc at 9:01 AM