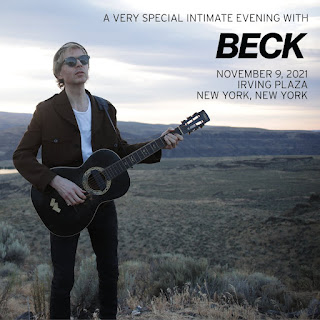 Beck played a mostly acoustic, one-off, intimate show at Irving Plaza full of hits and stunning covers.
"Did they tell you this is an acoustic show?" Beck asked the crowd as he took to the stage on Tuesday evening at the small for his stature Irving Plaza. "There are pyrotechnics though. Probably during 'Lost Cause'" he joked to much laughter as the crowd settled in for what would turn into a lengthy evening of atypical live cuts from his expansive discography. Just to set the record straight, however, the show was about as acoustic as Nirvana's performance on MTV Unplugged. While Beck himself might have been playing an acoustic guitar, he had the backing of electric keys and guitar to flesh out a lot of his songs. Dressed in an all white suit, he had an eerie Elliott Smith resemblance that was only heightened by his large, hollow-body guitar and much of the evening, as you may have expected, was spent on more of his low-key and sometimes somber tracks. He kicked things off with "Guess I'm Doing Fine" from the brilliant Sea Change which immediately met the desires of the crowd and it was off to the races for a rather special evening. "This next one is a weird second song to play" he told the crowd before "Nitemare Hippy Girl" and it was clear that deep cuts from his catalogue would be on the table for the night's set list. He was in high spirits throughout the evening and talked a great deal between songs, but that didn't cut into the staggering number of tracks he'd play. This was a fan's show, so while he played the hits, he also took requests from the crowd nearly off the bat which resulted in us being treated to lots of rarities. "Cyanide Breath Mint" yelled a fan early on and he happily obliged. "Rolling Stone or Spin Magazine, one of the big music magazine, you know, called this song unlistenable. I guess I'll let you guys decide if that's true" he said before declaring that he still thought it was a great name for a song and a very '90s one at that. Things were a little rusty as he forgot some lyrics early on and restarted a couple tracks, but it all factored in to the uniqueness of the show. "This was last minute" he told the crowd "and I asked my agent if I could play a show since my tour isn't gonna start for another year." He also stated that the band (himself and two of the session musicians from Sea Change and Morning Phase Roger Joseph Manning Jr and Smokey Hormel) hadn't played together in about five years and put the show together in 90 minutes. Given the setting, the show leaned heavily on Sea Change (my personal favorite of his), but other tracks that aren't often afforded the live treatment were the real highlights of the night. As things progressed, the crowd really gave in to the charm and magic of the evening. "I have a lot of Brazilian friends in the crowd tonight so I have to play this one." "Tropicalia" cried a fan. "That's right!" he replied as the samba rhythms of the track began to shake out across the club. The beat took over and a new energy took control of the room and the rest of the night only escalated from there. He remarked about his early days of his career when he couchsurfed around New York and filmed videos for MTV. This led into a great story about the filming of the video for "Jack-Ass" staring Willie Nelson and how the VMAs that decorate his home in LA have lost their significance with fans. "Did anyone see the new Velvet Underground documentary? Yeah?! About time. That's peak New York music for me so I'm gonna play this one. My mom is also here tonight and she was around in the city for those shows so I'm excited to play this for her." The lengthy intro led to a sparkling cover of the VU's "Sunday Morning" which felt like his own personal emotional peak of the night. "I think it's time we turn this disco ball on" he said before pleasuring the crowd with a dazzling version of "Debra" before bringing the night home with back-to-back crowd pleasers "Where It's At" and "Loser." Capping the night with two of his biggest hits brought down the house and perfectly rounded out the night, building slowly before culminating with total elation. He returned briefly to cover his folk hero Daniel Johnson's gorgeous and haunting "True Love Will Find You in the End" and capped off a rather remarkable night that felt special in every way. "I needed this more than anyone" he told the crowd and while it felt clear all along that he was having fun onstage, this was yet another validation that this was an exceptional evening.
Set list: