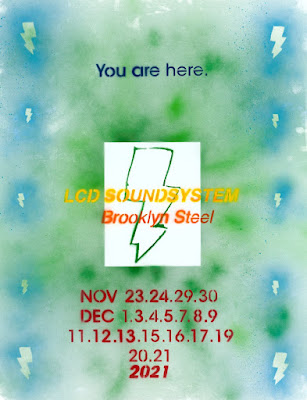 LCD Soundsystem is back and they're playing 20 nights at Brooklyn Steel to celebrate!
When a band announces their first shows in three years, it's an exciting event. When they announce twenty shows all in their hometown as these first shows, it's a damn spectacle. The once retired and now revived LCD Soundsystem announced these shows and immediately created demand for the hottest tickets in town. A great thing about playing so many shows is that diehard fans can make multiple attempts for tickets and the band can play a pretty different set list each night. Behind an absolute mountain of gear, the band came out at 9:15 and immediately hit us with "Beat Connection" being played live for the first time since 2005. From there on out, I knew it would be a special night and entire run of shows. "We felt like playing old stuff we never play" shouted James at one point and it was clear the band was there to also have fun and not strictly to play the hits (all though pretty much everything was still a hit). "Get Innocuous!" continued the groove and the crowd really began to hit the collective dance vibe before "American Dream" put everyone under a bit of spell. "Losing My Edge" came and brought us back to life. The LCD song that kicked off the band's career and became an era defining sign of coolness. This is when the night really began to grab hold. Two more tracks from 2017's American Dream, "Emotional Haircut" and "Tonite," back to back saw the crowd in full force dance mode before the all out emotional toll of "Someone Great" took us all back for a more nostalgic feeling. This rapidly changed as soon as the group busted into "Daft Punk Is Playing at My House" which resulted in collective "woohooo yeah!" that rang out from the entire dance floor. It was hard hitting and the lights reflected the intensity perfectly and really gave way to the dance-punk vibes they helped pioneer. Everything hit with such force and intensity, but never was anything but fun. Perhaps the most legendary moment of the night came when the opening to "How Do You Sleep?" started to ring out. The guy next to me turned and said "oh my god, is this 'How Do You Sleep?'" and I assured him it certainly was. The main center piece from American Dream is a rare live track and had never been played in NYC until last night. It was a part of LCD history and we were there! "Home" was a wonderful way to cap off the main set and again made for a rather magical moment where the world seemed to stop slightly and just bask in the glow of life and seeing this band once again take the stage. It really felt like being home indeed. After a quick break, they returned to drop another rare gem, "Yr City's a Sucker," before hitting us with the most perfect encore of all time. "New York, I Love You but You're Bringing Me Down," as always, was a massive singalong event and felt as surreal as ever to hear beneath a giant disco ball and in the city for which it was written. It's such a wonderful song that hit at such a moment in time, but feels just as relevant as ever for a city that always gives so much. As soon as the notes rang out, however, for "Dance Yrself Clean" it was all over. The entire building seemed to form a collective mind meld and it was a rapturous dance party for the ages. When the beat drop, it felt as if the entire crowd jumped simultaneously and continued to party the hardest they had all night for one of the most electrifying dance breakdowns of all time. Of course, in true fashion, they brought the night to a close with a song of a generation and one of my all time favorites. The instantly iconic piano riff created the must euphoric buzz that pierced through the crowd and made for the one of the greatest moments of the night. For a second, everyone felt like a best friend with strangers happily jumping, dancing, and embracing one another in pure joy. After a very long year and a half, being able to celebrate like this felt like a dream and something that at times felt like would never happen again. When James belted out "if I could see all my friends tonight," I hugged mine as tight as possible and life felt good again. The magic of the music a celebratory event and a moment never to forget.
Set List:
01 "Beat Connection" [First time since October 12, 2005]
02 "Get Innocuous!"
03 "American Dream"
04 "On Repeat"
05 "Losing My Edge"
06 "Emotional Haircut"
07 "Tonite"
08 "Someone Great"
09 "Daft Punk Is Playing at My House"
10 "Thrills"
11 "How Do You Sleep?"
12 "Movement"
13 "No Love Lost" [Joy Division cover]
14 "Home"
--
15 "Yr City's a Sucker"
16 "New York, I Love You but You're Bringing Me Down"
17 "Dance Yrself Clean"
18 "All My Friends"
Posted by marc at 10:37 AM