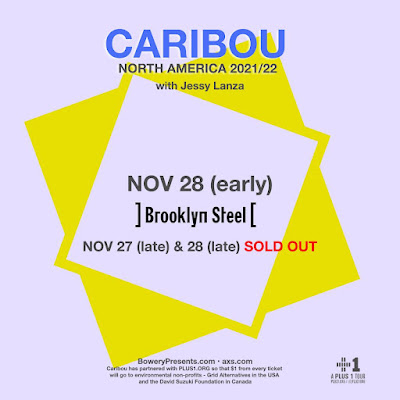 Caribou were finally able to play the first of three shows at Brooklyn Steel in support of 2020's excellent album, Suddenly.
"Thank you for waiting two years to see us!" Dan Snaith said early on during his first of three shows at Brooklyn Steel. Originally announced before the pandemic and scheduled for March 2020, the shows had been postponed several times before finally being able to happen before a very hyped crowd and it was the clear that the wait had been building up the anticipation. Dressed in all white, Snaith and has band played an incredibly tight set of dance-heavy electronic jams that carried the party through numerous highs. It was a heavy blend of samples and loops combined with some fantastic live musicianship that really helped secure the groove of the evening. The quintet was locked in and delivered extended renditions of songs that explored new depths and really allowed for them to each unfold in new fashions that highlighted the intricate rhythms at hand and the remarkable songwriting talents of Snaith. The background visuals were also equally impressive and added even more layers to the night. Brilliant colors captivated the audience with kaleidoscopic wonder bringing forth new dimensions to the already buzzing and complex songs, but helped them reach new heights and added on to the overall experience. Snaith's treated vocals allowed him to take on new territory and match the elevated tones brought forward by his band and go head-to-head with some of the looping wizardry and synth magic he conjured up on stage. When he wasn't busy jamming away on his laser-sharp melodies, he got behind a kit and went face-to-face with the other drummer onstage for some epic beats that were chock full of disco hi-hats and crisp snares that propelled each track forward with such magnificent rhythms and tight fills. The sustained grooves elongated the tracks and really allowed for the crowd to get lost in the melodies and drift off into the evening, the saturated textures only adding to the illustrious glow that emanated from the stage. Techno, disco, and krautrock influences all felt prominent throughout the evening and witnessing a full band bring the songs to life was refreshing and really reinforced the energy of the performance. During the extensive take on "Sun," Snaith stepped off to the side to relish in the moment as the crowd continued to dance to the jam with infinite pleasure. "Home" was a sultry number that lightened the mood and gave a nice break from the heavier electronic moments before the new song "You Can Do It" brought back the whirling, dizzying vocals and propulsive beats. "Never Come Back" was a solid close to the main set, but it was the encore of "Can't Do Without You" that brought everything to the peak. The looping vocal is a hallmark of Caribou's catalogue and the explosive culmination of the track is sure to send any crowd into spiraling bliss. Caribou was one of the first shows to be postponed back in March 2020 and finally being able to see the group felt like a huge win and seeing the joy from the band on stage only reaffirmed that the wait had been worth it.
Set list:
01 "New Jade"
02 "Odessa"
03 "Our Love"
04 "Like I Love You"
05 "Lime"
06 "Bowls"
07 "You and I"
08 "Back Home"
09 "Ravi"
10 "Sun"
11 "Home"
12 "You Can Do It"
13 "Never Come Back"
--
14 "Can't Do Without You"
Posted by marc at 11:24 AM