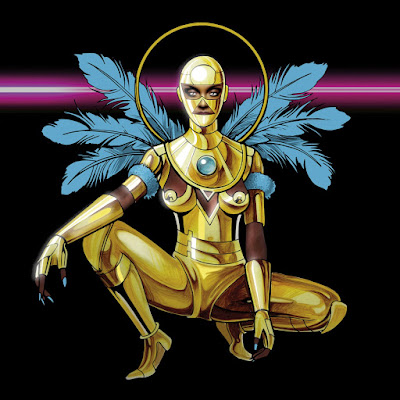 Dawn Richard has announced her new album (her first for Merge!) and shared the lead single "Bussifame" ahead of the record's arrival this April.
The history of Dawn Richard's musical output is one for the books. Years ago, she get her start as a member of Danity Kane, made an attempt as a rising R&B star, made a fantastic guest appearance on a criminally underrated Dirty Projectors song, and is now signed to indie powerhouse Merge. The once Bad Boy Records signee and Diddy protege, is now on the same label that includes Neutral Milk Hotel as part of its alumni. Let that sink in for a minute.
On her first song from her new album, Richard utilizes her new indie credibility to create a pop song that is destined for the dance floor. There is a bit of Robyn's "Beach2k20" vibes on this one and Richard delivers flawless rhymes that creates a combo guaranteed to make you groove. According to Pitchfork, "Richard called Second Line 'a movement to bring pioneering Black women in electronic music to the forefront.” The record, according to the press release, follows Richard’s persona as King Creole, an “assassin of stereotypes, a Black girl from the South at a crossroads in her artistic career.' Regarding the album title, Richard said, “The definition of a second line in New Orleans is a celebration of someone’s homecoming.” She continued, “In death and in life, we celebrate the impact of a person’s legacy through dance and music. I’m celebrating the death of old views in the industry. The death of boxes and limits. I’m celebrating the homecoming of the Future. The homecoming to the new wave of artists. The emergence of all the King Creoles to come. This is our revival.”
Second Line: An Electro Revival is out on April 30.
Posted by marc at 6:31 PM