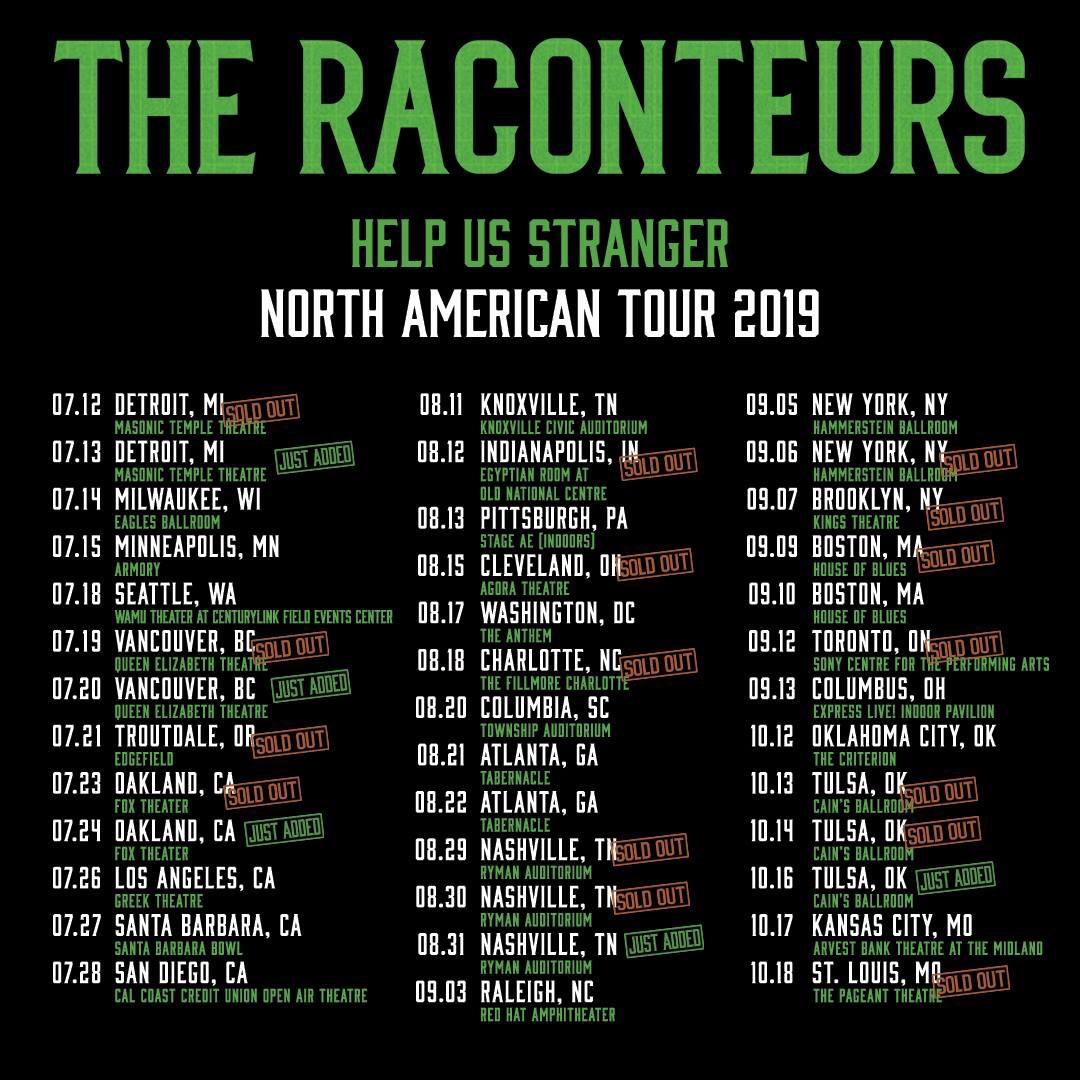 In support of their great new record Help Us, Stranger, the Raconteurs rolled into Hammerstein Ballroom for their first of two New York shows this weekend.

Crashing the stage with total swagger, it was clear before he even picked up a guitar that Jack White was ready to rock as he climbed up on his amps to rev up the crowd before his bandmates conquered the night with over two hours of total rock and roll power. The night kicked off with the title track to their second record, "Consoler of the Lonely," and from that moment forward it was a total circus of the most illustrious tricks and totally stellar moments that let the band prove that not only is rock and roll far from dead, but it still has the power to get a crowd on their feet and give in to their chaos. When they played Baby's All Right in Brooklyn earlier this Summer, it was a thrilling event to see such a great band play in such a small club, but seeing them now after a streak of summer shows in a venue that allows for more of a stage show was a spectacle for the ages. Jack White entered the stage with his energy at an 11 and he never lost momentum. Since most of the vocal duties in the group belong to Brendon Benson, White really shows off his skills and let solo after solo rip through the night, each one seeming to overpower the one before and proving that he might just be the last great rock star. His presence is unmatched and the rest of the band highlights his unparalleled talents. The set was  spread well across their three records and the band also made sure to indulge in some brilliant covers as well. Hearing Jack White bark along to the Stooges "I Wanna Be Your Dog" was a moment I'll cherish for quite some time and watching him egg on Benson's sweet, but subtle acoustic inflections seemed to make their chemistry blossom. Without mention, Nick Zinner of the Yeah Yeah Yeahs joined the group for a song From "Level" to "Broken Boy Solider" and "Hands" to "Together" the group was an absolute force and White was a stream train leading the charge, full speed ahead. "They're telling me to get off the stage, but I just can't do it!" he exclaimed towards what felt like the end of the night, but the band continued to rage on. "Blue Veins" and "Carolina Drama" were more hits for the ages, but when the group returned for the encore, White strapped on a Flying V guitar and unleashed absolute fury for "Salute Your Solutions" before closing out the night with a beyond epic version of "Steady, as She Goes." The show was a triumph, the group playing at their absolute peak and without question one of the top rock shows of the year. When the Raconteurs first formed back in 2006, I remember seeing an ad that red something like "Raconteur is French for story telling. These guys have some loud stories to tell." Now that they're back, the saying still holds up. These guys know how to rock and bring the volume to their set (at one point I saw someone crowd surf) and t's fun to see a band with such energy play such honest rock and roll. Jack White was part of the rock revival that kicked off the new millennium and twenty years later he has showed no signs of slowing down and for those who are still ready to follow, he seems like he'll be leading the charge for more years to come.

Email ThisBlogThis!Share to TwitterShare to FacebookShare to Pinterest
Labels: The Raconteurs