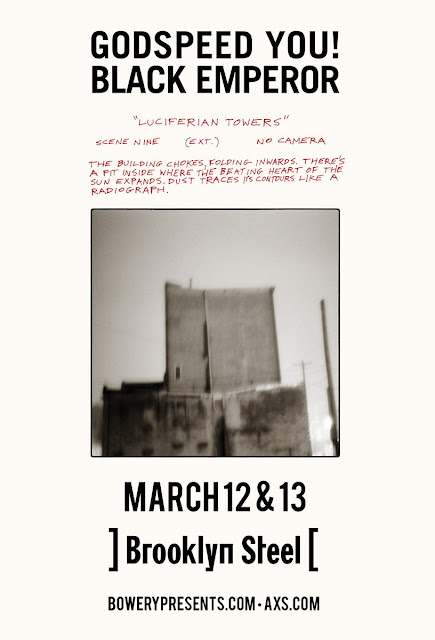 Godspeed You! Black Emperor are on the road in support of last year's great album Luciferian Towers. On Monday, the band played their first of two shows at Brooklyn Steel.

Attending a Godspeed show is almost more of an endurance test than it is an exceptional sonic experience. Their songs move at a glacial pace, building and building for what seems like eons only to erupt in sheer bedlam before collapsing upon themselves. It's one of the more physically demanding shows (think the magnitude of My Bloody Valentine, Swans, or Lightning Bolt, but in a more controlled manner) and yet somehow their controlled chaos is one of the more euphoric and transcending live shows. As the lights dimmed, a low rumble rang out over the club for an uncomfortable amount of time as a dark purple glow basked the stage. Slowly, the band took the stage as colors shifted to a burnt orange and projections of grainy images began to envelope the stage. The word "hope" began to flash on the screen in a written scrawl that bled into static as the band began their nearly two-hour set of totally droning mayhem. It's one thing to hear these songs on record and imagine the work that goes into composing something of this nature, but to see ten members of the band reproduce these tracks live on stage is another sight to behold despite the fact that the band spends the majority of the show shrouded in darkness. However, Godspeed have always been more than just a band. Their magic is in their presence. They're an entity, a musical manifestation of an idea. A melodic representation of persistence. Without speaking a word, their songs are a symbol of resistance and they're only enhanced by their back drops of protests, riots, and planes falling out of the sky. After playing their latest record in full, the band dug deep into their catalogue and played Slow Riot for New Zero Kanada from start to finish to close out the night. Hope, desire, despair, destruction. All of those words could be used to describe GY!BE and throughout the course of the evening, all of those emotions have raged through their set. It's a polarizing experience and one that completely assumes control of your body. It can be an overwhelming sensation at times, but their careful balance of loud->soft->loud->soft is such an intricate part of their art that nothing ever becomes unbearable. It's a draining phenomenon to witness a Godspeed show, but one that will leave a lasting impression. They were a band once thought to be gone forever, but like many others, they reemerged from the ether. On their second journey, the band has yet to test new boundaries, but thankfully they still have much uncharted territory from their first jaunt that everything feels just as exciting and relevant now as it did twenty years ago. That's just another element of their magic.

Email ThisBlogThis!Share to TwitterShare to FacebookShare to Pinterest
Labels: Godspeed You Black Emperor