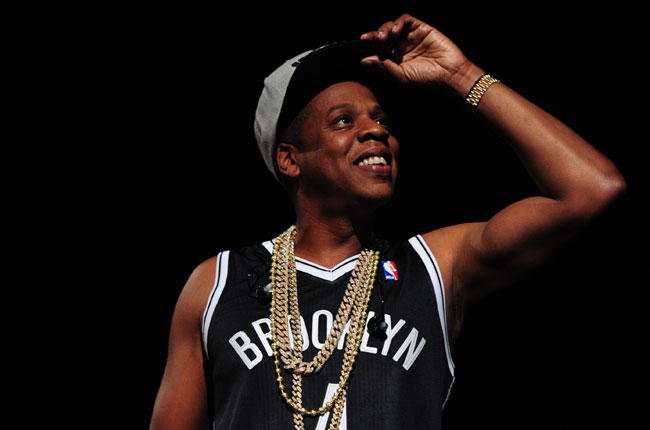 I have no doubt that if the Barclays Center popped up in my neighborhood, I'd be less than thrilled. However, when I descended upon the rusted monstrosity, I surrendered to its magnitude. It's alien like structure penetrated the ground and rose like a glowing orb into the night sky. Upon entering the arena, it became apparent that you were in a place unlike anything you've ever experienced in New York. The smooth concrete juxtaposed against sleek wooden panels made the area feel more like a lounge than an sports complex and upon entering the stands, the all black everything decor furthered that thought. If anything, Jay-Z has created the ultimate club at which he can play house band. For two hours the Jigga Man dazzled the crowd in the ultimate Brooklyn celebration. Everything from a "Juicy" cover to the constant acknowledgment of his hometown friends ("We're all from Brooklyn tonight!") made the purpose of the evening (and week) clear.  Jay-Z owns less than a percent of the Nets and yet if you ask anyone in Brooklyn "who runs this town?", there is a clear answer. HOVA assaulted the crowd with his bombardment of hits that have spanned his career, the forever epic "99 Problems" was an early evening highlight while brief bursts of "03 Bonnie & Clyde" and "I Just Want to Love You" reminded everyone just how many monster singles this man has delivered over the years. Stellar anthems "Big Pimpin" "Hard Knock Life (Ghetto Anthem)" and "(Ain't no Love) Heart of the City" were just as sensational as one could hope (hell, even "Empire State of Mind" was welcomed with open arms) and while some other tracks provided some perhaps necessary filler, Jay-Z earned his title as the self-proclaimed greatest rapper alive. There has been a lot of talk of just what this new establishment will do to the local community, but while we wait to find out, there will be plenty to keep us busy. He is New Yorker's favorite rags to riches story and with Beyonce by his side, he is on his way to becoming national royalty. Brooklyn, say hello to your once and future king.
Posted by marc at 10:44 AM