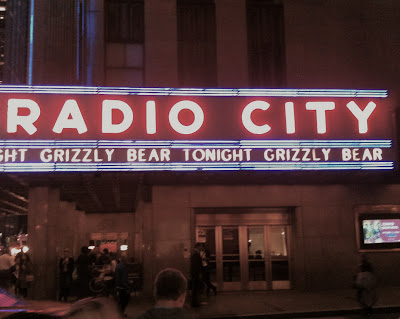 Let me take a stab at this, for those who watched Grizzly Bear arrive on the scene with Horn of Plenty, grow into a muscular cub on Yellow House and mature into amazing talent with the breath-taking Veckatimest and Shields, you have been apart of a special journey. What started out as a bedroom project from front man Ed Droste, has evolved into one of the most majestic and sumptuous bands of the last decade. Radio City marked their largest hometown show yet, and the band proved their worthiness of such an honor. Things kicked off with "Speak In Rounds" which cascaded beautifully into "Adelma" before an epic "Sleeping Ute" and then the band really hit their stride. The group was backed with pulsating lanterns that floated angelically throughout the evening and shifted into striking patterns as the quartet delivered awe-inspiring renditions of tracks from each of their fantastic albums. Complex rhythms were unleashed with impecable timing, slicing guitars slashed along arresting harmonies, and Chris Bear delivered spectacular drum fills that resonated to the top tiers of the theater. Everything from "Lullabye" to "Cheerleader" to "A Simple Answer" was performed with such confidence and dexterity that it seems rather surprising this is not one of the biggest bands in the world. When the opening notes of "Two Weeks" began to ring out, people lept to their feet and immediately vibed to the supreme melodies and the show rocketed to another level. The ability to craft such wonderful and dynamic songs was enhanced by their extraordinary raw talent and perfect flow from moments of thunderous crashes to times of suspended elation. For the encore, the band eased into their breakout hit "Knife" beginning with delicate warped vocals before allowing the song to burst into a magnificent eruption of colossal beauty. To close out the evening, Grizzly Bear stripped things down to their pristine acoustic essentials for a tear evoking version of "All We Ask" and proved that they will always, not just sometimes, make it look easy.

Setlist:
Speak In Rounds
Adelma
Sleeping Ute
Cheerleader
Lullabye
Yet Again
Shift
Gun-Shy
Ready, Able
A Simple Answer
Foreground
While You Wait For The Others
What's Wrong
Two Weeks
Half Gate
Sun In Your Eyes
--
Knife
On a Neck, On a Spit
All We Ask 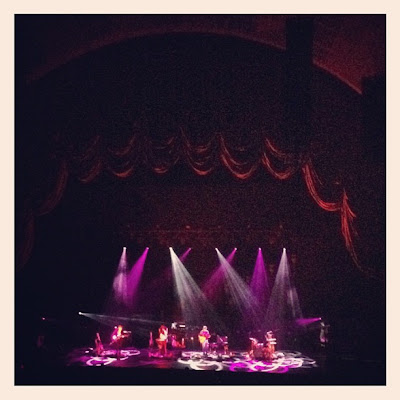 * bottom photo courtesy of Emilysaur
Posted by marc at 10:00 AM