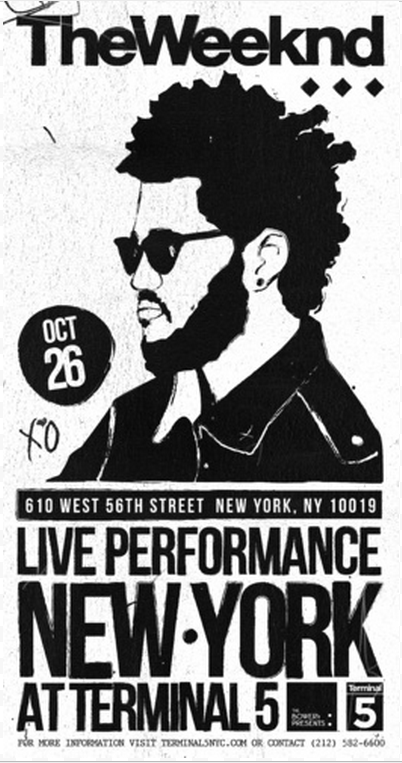 For a man shrouded in mystery, Abel Tesfaye better known these days as The Weeknd, had no problem packing Terminal 5 to capacity to deliver a stunning set of material from three mixtapes that will see an actual release next month. Within a year, The Weeknd went from a small bedroom project to playing headlining slots at major music festivals. Tesfaye's smooth as silk vocals have been reportedly unimpressive live, but he was in top form for this sold out crowd. Playing all the hits "Wicked Games", "Lonely Star", "High For This" the audience was in the palm of his hand shouting along to every word.  Backed with a sensational live band, every note was perfect, it begs the question of how big could this project get if everyone stays on board. He's already had guest appearances from Drake and it seems inevitable that he will soon reach a level many never would have imagined. "Loft Music" and "The Party & The After Party" acted as nice shout-outs to Beach House and the overdose of Siouxsie and The Banshees' "Happy House" had people losing their minds and made me wonder how many people knew what they were screaming along with. The technicolor pulsating orbs added flash and the breakdown into the second half of "Glass Table Girls" sounded rich in trip-hop nostalgia (hell Portishead's epic Dummy was the house music before the guy took the stage). When Trilogy hits stores in November, it'll be interesting to see how much of a shift there is in the momentum of his career and just how much bigger he'll get. "The doctors told me to cancel these shows" Tesfaye told us at one point, but 3 sold out shows in New York City was just something he couldn't pass up. Thursday evening he even dropped a new track "Empty" "for the fans that can't make it" in NYC which features a nod to The Smith's "Please Please Please Let Me Get What I Want". He knows his music and isn't afraid to acknowledge his indie indulgences something the R&B genre is not necessarily known for doing. His first mixtape "House of Balloons" showcased his strongest song writing so far, but he could still be on the verge of his biggest and best work to date.