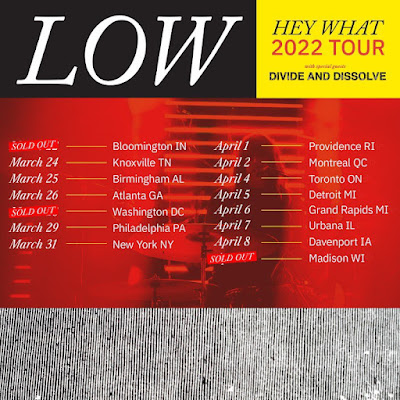 Low are on tour in support of last year's incredible HEY WHAT. They dropped by Webster Hall on Thursday night for their biggest NYC show yet.
Low is having a renaissance. Nearly thirty years since the release of the band's first album, the duo of Alan Sparhawk and Mimi Parker are making the best music of their career and playing to the largest crowds in their history. With thirteen albums under their belt, it can be hard to believe that the band is just now reaching their peak in not just creativity, but popularity as well. After a streak of good to great records, the band reinvented themselves while still remaining true to their core sound and ethos with the release of 2018's career defining Double Negative. Inverting the band's traditional dreamy, slowcore vibes in favor of striking, bursts of sound was a new twist and one that has paid off with massive rewards. As the touring trio took to the stage, it was clear that not only has the band refined their sound to a new creative apex, but they've brought their live show to new heights as well. They opened the set by playing the entirety of HEY WHAT from start to front and only paused when a fan begged for Alan to speak to crowd. "I'm trying to maintain a vibe" he replied, before ripping into a truly sublime rendition of "Days Like These." The drums were cranked up and Sparhawk's blasts of guitar cut through the air like a knife. It was equally elegant as it was extreme, the balance a true work of art. "I Can Wait" and "Disappearing" were other exceptional highlights from the record and seeing the band give each song a new twist or texture helped keep things fresh. As part of the show, the band was backed by three pillars of light rods stacked like columns on stage that projected remarkable patterns and shapes behind the band, back lighting them for an extra dramatic effect on top of their already moody tunes. For the remainder of the set, the band dug throughout their past and played a track from the majority of their discography. On stage, the band has similar doom metal tendencies like those of the band Earth, restraining their sound and holding in the intensity for sustained periods of time before releasing devastating waves of blown-out guitar. Sparhawk thanked the crowd for the warm reception and shared a great story of the band's first show at the Knitting Factory and how they love coming to play here. "Nothing But Heart" was another sensational number that felt like the true pinnacle of the evening and helped solidify an astounding night of music.

Email ThisBlogThis!Share to TwitterShare to FacebookShare to Pinterest
Labels: Low