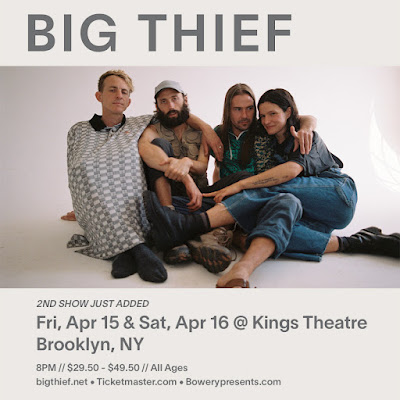 The unstoppable Big Thief wrapped up their second headlining show at Brooklyn's glorious Kings Theatre.
Big Thief is hard to pin down. The quartet's music has incredible range often switching genres from one track to the next and their appearances give off the impression that they could all be members of different groups. Tonight for instance, Buck Meek wore tight black jeans with a button-down, the drummer had an oversized sweatshirt and gym shorts, the bass player was in a neon pink jump suit, and leader Adrianne was outfitted in baggy jeans and crop top. Nothing about them gave off a unified feel. They sound, at times, like classic rock a la Fleetwood Mac or Neil Young, but can easily switch to country-pop or even reach the gnarly solos of grunge. After releasing two records in 2019, they returned earlier this year with the Sandanista-esque sprawling double album Dragon New Warm Mountain I Believe in You which has only stretched out their vision to something even more varying than one could've imagined. At this point, the band has hit a creative peak and on stage, they present themselves with such force and authority that it's hard to think of anyone else operating at their level. This is a new era of rock music and Big Thief are leading the charge. For their second night in Brooklyn, the band took to the stage as a group, but the opening song was handled only by Adrianne as the others watched along in pure amazement. The soft, acoustics of "Promise Is a Pendulum" sounded close and intimate, despite the venue's massive space and really set the tone for the night. "This is a new song we wrote that didn't fit on the last record" Lenker said before the group played "Happiness," the second song of the evening, which had me once again questioning "just how are they doing this?" Their chemistry on stage furthers their cultish vibes and continues to beg the question of how do these four all fit together, just when each of them couldn't seem more different, they come together to create something totally magical on stage. Drummer James Krivchenia's minimal drum set up sounded fantastic, with rich, full sonics that once again brought the intimacy of the group to the forefront and made the show feel even more communal than you'd expect for such an expansive theatre. For the mid section of the night, Adrianne traded her acoustic for an electric guitar, plugged in, and let the band rip! Raging intensity took the reins of the night for the next several songs as if the band had transformed into a whole new group ready to blast vicious solos and let out urgent screams. "Black Diamonds" and "Masterpiece" got the crowd to engage with pure enthusiasm and helped build the tone for what would come next. As the shredding riffs of "Not" began to ring through the hall, the drum rolls nudged the crowd and everyone began to move in unison to the beat. Meek and Lenker roared with fiery passion, creating waves of feedback and snarling guitar that rippled over the crowd for some life-affirming moments that hit the pinnacle of the evening with a dragged out, elongated finish. And just when it felt like the band had hit their heaviest notes of the night, they flipped things on their head and busted out a rocking, loud rendition of "Dragon New Warm Mountain I Believe in You" that could totally replace the blissful, acoustic original. Massive, metal-ready riffs blasted through the ornate room in an absolute Jekyll and Hide moment as the song transformed from sparkling folk to striking rock, delivering one of the most surprising and entertaining few minutes of the show. Going back to the original will never satisfy the craving this version has now firmly supplanted in my head. "Red Moon" brought the country-swing back to the night and got things bouncing with fervent energy and giddy responses from the pit. "Certainty" helped maintain their twang and the elation radiating back to the stage proved that everyone in the building was charmed by the group's tremendous sound. "Flower Blood" and "Simulation Swarm" gave things a hazy finish that really saw the band pull out all the stop to display their phenomenal song-writing skills. "Cattails" kicked-off the encore for easy, swaying start before Adrianne introduced her brother Noah to the stage and led the crowd in a massive singalong for the final number, the jubilant "Spud Infinity." Big Thief can feel like they exist in a world all their own and for a few hours we were welcomed to join them and revel in their presence. There are few bands doing anything quite like this and to watch it all come to life on stage is like watching magic happen right in front of your eyes.
Set list
01 "Promise Is a Pendulum" [Adrianne Solo]
02 "Happiness"
03 "Change"
04 "Time Escaping"
05 "Love Love Love"
06 "Black Diamonds"
07 "Masterpiece"
08 "Not"
09 "Dragon New Warm Mountain I Believe in You"
10 "Sadness as a Gift" [Adrianne solo]
11 "Secret Side of You" [Buck Meek song]
12 "Red Moon"
13 "Certainty"
14 "Flower of Blood"
15 "Simulation Swarm"
--
16 "Cattails"
17 "Spud Infinity"
Posted by marc at 12:16 PM