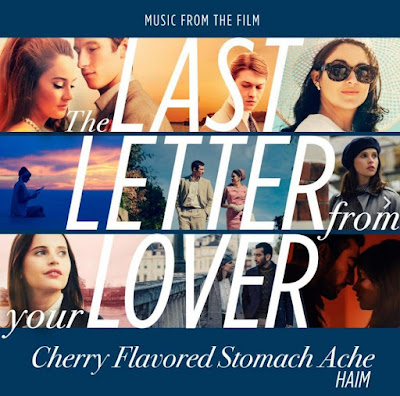 HAIM have shared their first new song since last year's excellent Women in Music Part III and it's called "Cherry Flavored Stomach Ache."
A shimmering acoustic shuffle opens this one and easy harmonica fills the place of mega-guitar riffs that are typical on a HAIM song. This one isn't necessarily a slowed down track, but it's minor in scale compared to their usual bangers. Still, HAIM in chilled-out mode is still something that resonates and still sounds like a casual summer jam. It's light and airy and according to the sister was recorded in the depths of quar and features co-production, once again, from Ariel Rechtshaid. There are nice cymbal crashes to punctuate the song in the right places and synths accentuate the rhythm to give it a certain sparkle.
The song is from the soundtrack for the Netflix film The Last Letter of Your Love and is streaming now.
Posted by marc at 7:53 AM