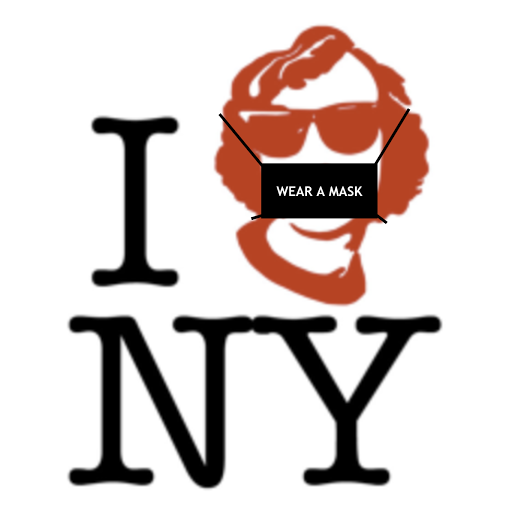 New York, I love you and you're not bringing me down. This week marks fourteen years since I moved to New York, a city I do not intend to leave.

Anniversaries are weird and while fourteen years wasn't a milestone I planned to celebrate (or even acknowledge), I felt compelled to express my love for New York and state that it's not going anywhere. Typically, I'd be writing a love letter highlighting my favorite memories and times spent in the city seeing my favorites artists play to my heart's content. However, this year has been different. When I wrote to celebrate my ten year anniversary of living in Brooklyn, I quoted Lana Del Ray's "I miss New York and I miss the music. Me and my friends we miss rock and roll." Months later, I still miss the music and seeing concerts, but I do not miss New York right now because New York is still the greatest city in the world. Opinion pieces have been floating around the internet proclaiming the death of New York City, but I am here to claim the opposite. Like Seinfeld said in The New York Times, "the true greatness that is New York City is beyond rare. It’s unknown. Unknown anyplace outside of New York City."

If you abandoned the city during the most dire time of need, I do not want to hear your thoughts on why you've claimed it's over. I wasn't a resident during the crimewaves of the 1970s, the crack epidemic of the 1980s, the fight against AIDS in the 1990s, or the attacks on September 11, but I stayed loyal to my city as it became the epicenter of a global pandemic and I will say, it wasn't easy. For months, the streets were abandoned and the vibrance of the city was replaced with endless sirens as bodies piled up at local hospitals. For months, we were confined to tiny apartments as fear and panic filled the streets. Still, while many fled to summer homes or booked residencies anywhere outside the five boroughs, I stayed. I learned to love my city in a whole new way. I felt connected to my local stores and restaurants and felt committed to help them survive even as I watched friends and co-workers head for the hills. After months of total depression, Summer arrived and so did a renewed fight for racial justice and the end of white supremacy. The murder of George Floyd and months of solitude ignited the city and gave it a new shot of adrenaline, waking us from months of shock and despair. However, the city that never sleeps was given a curfew and an "us against them" mentality became prominent and refueled what the Strokes so poignantly shouted nearly two decades ago, "New York City cops, they ain't too smart." Again, things seemed dark, bleak, and the light at the end of the tunnel was all but out. Everything about this year had already felt hard and challenging, but watching the rest of the country not take New Yorkers seriously as we endured an absolutely catastrophic Spring felt like a heartbreaking blow to not just our survival, but our mental health as well. As the virus finally felt under control here, it surged throughout the nation and the former epicenter became the only place I wanted to be. Slowly, people began to return, but so did their attitudes. Those who ditched their apartments and communities in a time of need, returned to shuttered windows, closed stores, and a new attitude. Those who had the privilege and opportunity to vacate returned with their noses stuck up because their city had "changed."

Well, to those who've announced the "death of New York," New York City has never felt better to me; a person who stayed when everything felt impossible and when so many others left. Today, communities are on the rise and coming together in ways I never would've imagined. For the first time in fourteen years, I feel such an incredible sense of belonging. For the first time, I know my neighbors and I know their stories. Recently, I started attending a nightly vigil in North Brooklyn that is about to celebrate 100 consecutive nights of gathering, and as I said to Greenpointers, “this is an amazing way to meet people. Tonight, I can probably name 10 or 15 people that I did not know until I started showing up here.” We still may be ways away from a return to "normal," but the New York I know and love continues to show-up and impress me in new ways. Streets now look like those in Europe, with outdoor dining proving to be a new experience. Outdoor movies in parks and street performers reclaiming space for creatives. I know that Winter will come and change that, but I look forward to the new ways we continue to push forward. I look forward to a city that can once again be embraced by artists and thrive as a creative capital. I look forward to the new New York where you can still take a walk on the wild side, but know that New York cares and that we live in Brooklyn, baby, and we're gonna make it! I look forward to everyone who escaped to the Catskills, Hamptons, and Florida staying there and leaving the city for those who never gave up on it. To once again quote Jerry, "we’re going to keep going with New York City if that’s all right with you. And it will sure as hell be back. Because of all the real, tough New Yorkers who, unlike you, loved it and understood it, stayed and rebuilt it."

So, as the National said, "there's no leaving New York." It's still the greatest city in the world and I've put together this playlist of songs to remind us all why we loved it in the first place. Through the grit and grime, there is no where else I'd want to call home.
I still, and always will, ❤️ New York. See you all in the pit, 🤘🏻!
Posted by marc at 7:22 PM

Dang this kinda reeks of privilege. U want a pat on the back cuz u stayed and friends didn’t? Oh you had a choice? Oh u even know people who had the means to leave? And months of solitude did not ignite the city. The protests aren’t some fun activity to do because quarantining was hard. People were brought to a point of 0. A legacy of systemic racism and well meaning white liberals who pretend they care, but when it comes time to put their kids in their neighborhood school, they opt out and perpetuate one of the most segregated school systems in the country, led to a desperation in the pandemic. Some people have nothing left to lose. That’s when real change happens. That’s why there’s hope. People are sacrificing themselves to lay a foundation. To cause a seismic shift. Nyc is a dark fucked up place. Not a playground for those who can ponder leaving in a pandemic. White privilege is white liberals who point out other white people who have privilege as if they don’t. White privilege is being able to blinders.