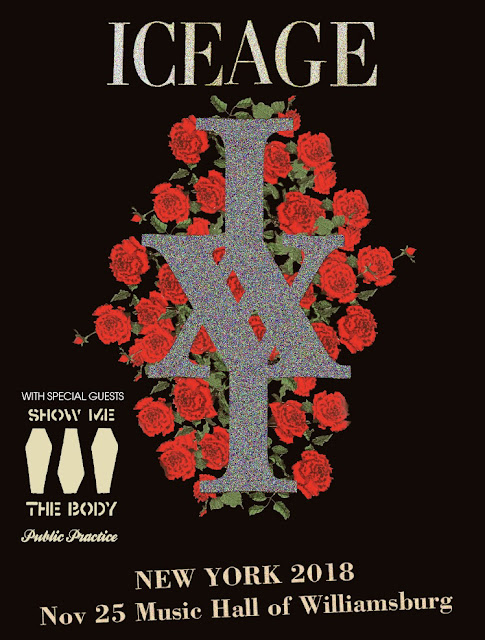 Iceage are wrapping up another stellar year with two more shows in Brooklyn to support their latest record, Beyondless.


At the first of two shows, the Danish punks wasted no time driving right into their latest material, storming into "Hurrah" and "Pain Killer" and setting the pace for the night at an ultra high. The band's rugged hooks and disheveled look are no indicator of what the foursome can unleash on a crowd, their rough and tumble snarl blending with steaming cow-punk twang is a sound all of their own, and they're true masters of their craft. Having seen the band support each of their three previous records, it's remarkable to see how far they've come and how much they music has progressed. Breaking up the new tracks, the band let loose with a wild and reckless version of "The Lord's Favorite" that truly lit up the room and saw perhaps the biggest reaction of the night. The song's furious stomp turning into a swirling, ragged banger. Elias Bender Rønnenfelt struts across the stage with a swagger and charisma that him feel like a frontman for the ages, never once stopping in his tracks as he dashed from side to side conjuring up an energy that was ready to erupt at any moment. As much as their music has brilliantly transcended into something a bit more inviting, when they dip back into their back catalogue, the night really took a turn to a new extreme. "White Rune" came out blazing and the band ripped apart "Ecstasy" with raw energy, raucous screams barking over buzzing guitars. After seeing the band the first time around, it was clear the band was playing with a level of confidence it was as if they'd been at it for years. Now, four albums into their career the band is playing with authority and attitude that is unmatched by their peers and without a bad record to their name, it continues to be exhilarating to be a fan and watching the band plunge into these tracks is a total thrill. As the band tore into "Catch It" and the pit burst into a frenzy, Rønnenfelt leapt into the crowd in a moment of pure, intense passion and unrivaled showmanship. Iceage have risen as figureheads of critically loved punk and have done so without sacrificing their style and brand of intensity and it continues to be inspiring to see what they'll do next.
Posted by marc at 7:12 AM