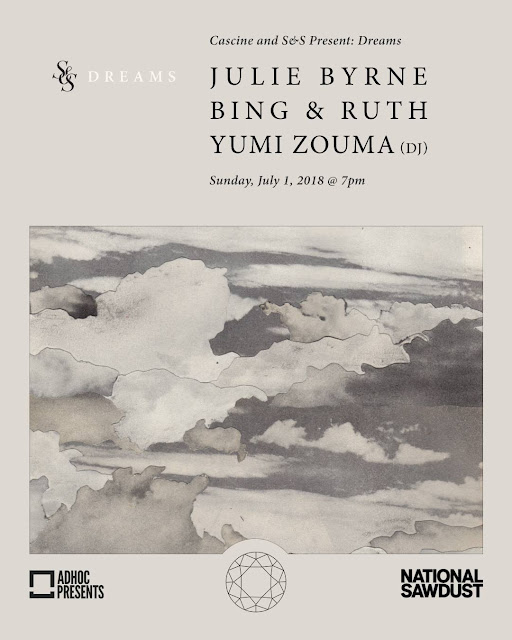 Stadiums & Shrines celebrated the release of their compilation album Dreams, out via Cascine, by hosting a party at National Sawdust featuring a headlining set by Julie Byrne.


Julie Byrne makes splendid psych-folk that feels both immediate and celestial all at the same time. Her voice is pure nirvana and her delicate finger-picking makes for a sound that feels both larger than life and deeply personal. Following a day of blistering heat, her music felt essential for a comedown, a salve that basked the audience in true auditory bliss." Come dream with us" she said as she started her set, and for just under an hour, we were all under her spell. Even while speaking, her voice sounded like velvet and the audience hung on every word that she whispered between songs. Typically a solo show, she welcomed a violinist and synth player onstage with her to give her songs a wondrous new depth, making them feel somehow even more exquisite than before, without losing anything that made them so strikingly mesmerizing in the fist place. Hey gauzy vocals brushing over such ethereal, acoustic guitar work is a truly transformative experience, bewitching her crowd into a dream-like trance. Each song an enthralling odyssey composed of subtle nuances that come a bit more to light when performed live, bringing forth more texture and balance to her already alluring song writing. "Follow My Voice" felt like a hymn and "Natural Blues" was enchanting to say the least. Personally, "Sleepwalker" has always been the gem in a treasure trove of a record, but given the tremendous acoustics of National Sawdust, it felt even more sublime than I could've ever imagined. Her songs are pastoral in nature, often talking of adventure across this vast nation and dabble in her existential thoughts as she guides us through her journeys. On stage, she leads her listeners on explorations through her charm and majesty, her guitar her scepter on her conquest.