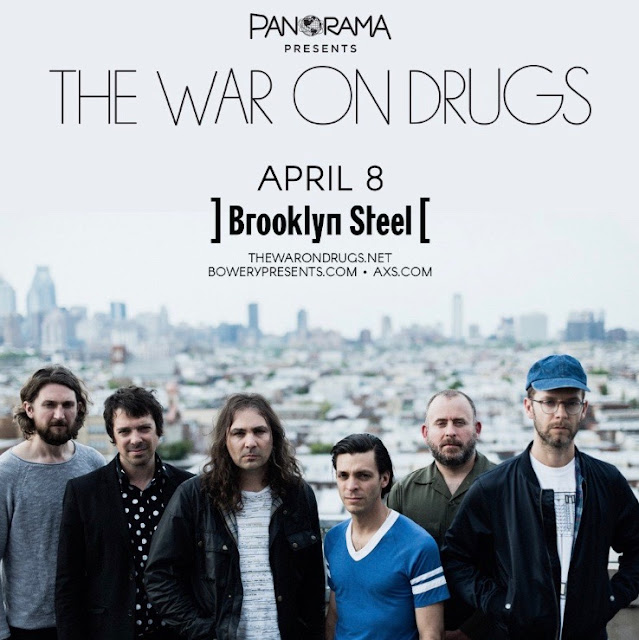 Adam Granduciel has been performing as The War on Drugs since 2005, but his last two albums have propelled him to the upper echelon of modern indie rock. Still making rounds to support last year's marvelous A Deeper Understanding, the band dropped into Brooklyn Steel for a pre-Coachella warm-up show.

For a while, it seemed like heartland rock might never see a proper resurgence to pay tribute to a genre of rock and roll that embodied the essence of purified American life. Music meant to be played while cruising down the highway, windows down, sunglasses on, and the radio cranked-up to maximum volume. Of course, 80s-era output from Springsteen, Dylan, Young, and Petty don't always garner the same worship as their 70s masterpieces, but their role in shaping indie rock is nothing to ignore. The War on Drugs has spent their last two records fully embracing the silver-lined synths and elongated guitar riffs that have come to suit the band with such exquisite fashion that watching the songs performed live takes the band's level of maturity and stature to another level. For two hours, the band stretched their pristine Americana straight into the hearts of the crowd, pandering to the essence of what it is to be a bonafide American classic for their generation. The music is never flashy, solos are not made-up of technical prowess, but rather by the ability to stretch a song to its utter limit without breaking down its structure. On stage, the band is a six member force and each song feels massive and pushed to the limits, the lush sound building upon itself resulting in moments of sublime sonic bliss. Granduciel intensifies with each track to make the songs undertake a whole new persona when performed live. "Holding On" and "Under the Pressure" were taken to new heights that somehow superseded all expectations, but never over stimulated the audience with exaggerated showmanship. While the records are certainly impressive and some of the best albums of the past five years, the live performance is truly where the band is establishing their shot at greatness. Time and time again tracks were performed with staggering brilliance that spanned for infinite amounts of time (it's no wonder he's covered The Grateful Dead), but never did anything reach jam band territory. In fact, the band only became more and more stunning as the night progressed. To end the main set, the band dropped a white curtain and a kaleidoscopic light arrangement bathed the band for the epic "Thinking of a Place." It was a magnificent finish to a mesmerizing show by one of the best rock bands of the past half decade.