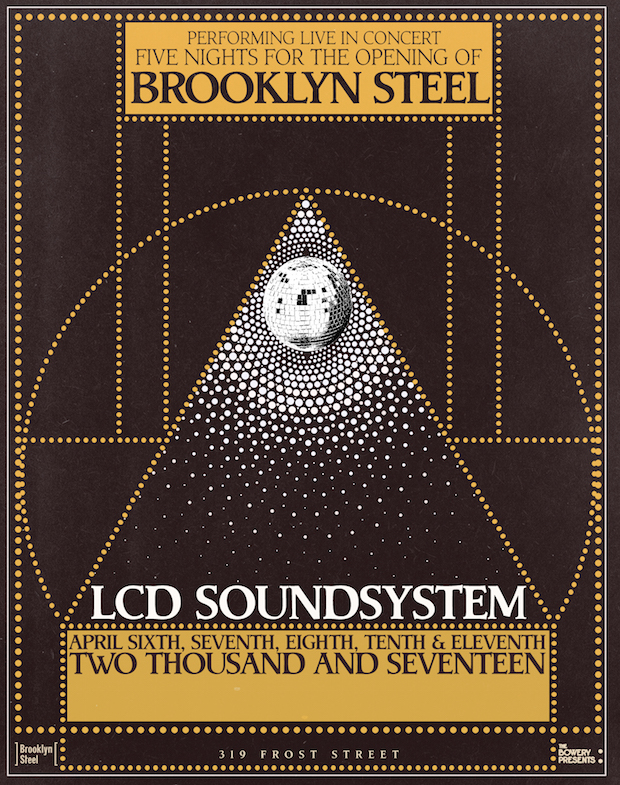 Back from the dead, LCD Soundsystem have now entered year two of their reunion streak. In accordance with the opening of the new Williamsburg venue Brooklyn Steel, the band has taken up a brief residency to help test our new songs will still bringing the hits.


I think I'll always be a tad bitter towards LCD Soundsystem for their short hiatus that they billed as a break-up. For the five years they were gone, I sincerely missed them and was saddened by the fact I'd never see the band play live again or hear new material. Their set at last year's inaugural Panorama Festival not only eliminated any grudge I thought I would hold on the band, but confirmed their brilliance by putting on not just the best show of 2016, but one of my actual all-time favorites. To be there for the band to help celebrate the opening of a new venue in the neighborhood they helped put on the map felt special and it was clear that this was a night of and for the fans. After kicking things off with a blown-out "Us v Them", which featured a propelling chant of "the time has come!!" to stupendous ovation, Murphy asked the crowd to restrain from filming or photographing the show. To a wondrous degree, the crowd obliged and the show somehow felt that more alive.  There was a minimum number of phones in the air for the show and it was actually quite refreshing. "We're gonna play a bunch of songs you do know and then we're gonna play some songs you don't know" James told the room as the band whipped out the hits from across their three full-lengths. Earlier tracks like "Tribulations" and "Yeah" got the crowd to jive together in euphoric unison. On stage, the band is an army of what seemed like ten deep and their dynamic is unshakable. Weaving together thick textures of synths, guitars, percussion, and Murphy's dry lyrics, the band is remarkable at reviving the sound of the mid-aughts while still standing the test of time. I'm not sure the Rapture's "House of Jealous Lovers" still packs the same punch as "Daft Punk is Playing at My House." Their disco-punk anthems are perfectly intertwined with blissed-out art-rock sensations like "You Wanted a Hit" and "Home" and create the ultimate experience in modern nostalgia. For a band that embraced the stylized glimmer of the 70s and 80s, the group seemed to waste no time in regathering and are now set to release a new record later this year. Still, while it's easy to focus on the gains the band has made by reuniting, seeing the band live rekindles the memories of just why you loved the band so much in the first place. The pulsating hums of "Someone Great" still send chills down the spine and "New York, I Love You..." will forever feel like an another anthem for this electric city and seeing people hold-up actual lighters instead of phones for this number was truly special. For the encore, the band unveiled the new tracks in front of an eager and respectful crowd. Phones were down, the audience was hushed and it became a thrilling moment as we heard the new cuts. "Tonight" sounds like a classic LCD number with a thumping synth line and hard beats, but it was "American Dream", another powerful ballad-esque song that really felt like it had a lot of heart. The evening commenced with an impeccable one-two punch. "Dance Yrself Clean" will always revitalize the crowd late into the evening and you can be sure that when the beat drops, everyone jumps as one and lights are sure to go into a frenzy. To end the night, Murphy dedicated the final song to Glenn O'Brien. As the keys to "All My Friends" began to ring out, the building seemed to spiral into a state of nirvana. A defining song of a decade, the track immediately releases endorphins amongst a crowd and on a Friday nigh in early April, as the weather begins to transform from winter to spring, and the temperature rises, it can reignite a love-affair with New York City like nothing else. Like it's happening for the very first time and sending the crowd off like a salesforce into the night. Experiencing the song live in Williamsburg, over a decade after the founding of DFA and the band itself, felt like a brand new sensation and watching a capacity crowd collectively lose their mind is certainly not something one will soon forget.