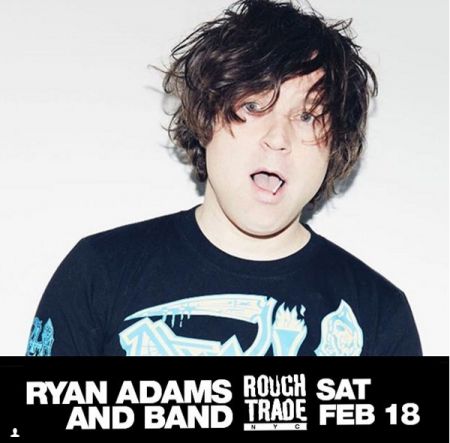 Ryan Adams has released sixteen full-length albums (four are credited to himself and backing band The Cardinals and one is a song-for-song cover of Taylor Swift's 1989) since splitting from Whiskeytown in 2000. With a discography that extensive, every show can be a bit of a surprise in terms of a setlist. His show at Rough Trade focused heavily on the new record (he performed ten of the album's twelve tracks), but still managed to throw in some older hits for die-hard fans. Adams is known for his drug and booze fueled past, but Saturday evening found him in great form. He was open and honest with the crowd, encouraging them to "take as many picture and video as you want just please turn off the fucking flash" just before jamming into the almost two hour long set. His band was sharp and gave off the impression that they'd been playing together for years. They followed each other through extended breakdowns and never once felt out of sync. Adams' voice also sounded fresh and recharged hitting a range that I didn't expect to come across so clear and full. New tracks "Prisoner" and "Doomsday" felt like classic Ryan Adams material reckoning back to the days of Heartbreaker and Gold and gives the new album a dynamic feel of older nostalgia with new freshness. As the night progressed, the band busted out a good amount of tracks from The Cardinals playing favorites like "Peaceful Valley" off Jacksonville City Nights before the one-two hit of "Let It Ride" and "Magnolia Mountain" which saw the crowd really groove along with the band for some prolonged and heartfelt solos that really carried into the night. "Shakedown on 9th Street" capped the evening and saw the biggest reaction from the crowd. Seventeen years later and the track still rocks hard. For the encore, the band went back and played another track from Cold Roses, this time the self-titled jam, and really let loose allowing the song to come alive. Almost two decades into his solo career and his music still feels timeless. It's been a while since he dropped a modern classic like his first two releases, but his work ethic and ability to churn out quality records is something to marvel. He's a singer-songwriter of a generation and with such an illustrious catalogue of work behind him, it'd be hard to loose the feeling of excitement and joy that comes with any of his shows. Seeing him in a venue as intimate as Rough Trade felt like a real treat to anyone that's been a fan of his for years and without fail, Adams lived up to his legacy.