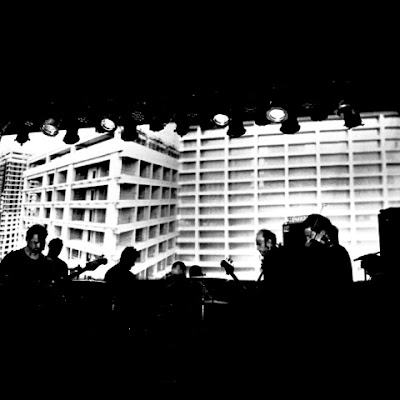 Canadian collective Godspeed You! Black Emperor wrapped up a three night run in New York with a stellar performance at Warsaw.

In a lot of ways, Godspeed operates more like a manifesto than a band with political imagery acting as a crucial part of the band's identity. In the late 90s and early aughts, they were pioneers of post-rock, a genre that has since seen a major decline in popularity after notable bands failed to replicate their best work and the rise of EDM all but pushing guitars to the furthest realms of music. However, since reuniting in 2010, the band has released two great albums that have continued to capture their enormous and unprecedented style without compromising any of their original values. This year's Asunder, Sweet and Other Distress may not have hit with quite the same impact and tenacity as 2012's Allelujah! Don't Bend! Ascend!, but it still functions on the same mission statement. GY!BE is an unruly act that conjures fistfuls of emotion, a guiding light through troubled times, and a (silent) voice for those seeking justice. Evoking the elements of the Earth and the struggles of civilization, their music captures the scale of humanity against all odds. Their behemoth sound lurched forward at unparalleled speeds, captivating a crowd while washed over in grainy juxtaposed footage of plants and mass construction For nearly two hours, the band marched onwards, levitating their sound against uncharted terrain. A marathon set that tested the limits and never dropped a beat. Watching all eight members coalesce their arrangements with such staggering perfection was truly a sight to behold. In all of their glory, Godspeed reach a pinnacle so overwhelming their stature is beyond compare. From the darkness in which they emerged, ideas of peace and light shone through providing a sense of hope that is forever powerful enough to weather their storm.
Posted by marc at 8:25 AM

Email ThisBlogThis!Share to TwitterShare to FacebookShare to Pinterest
Labels: Godspeed You Black Emperor