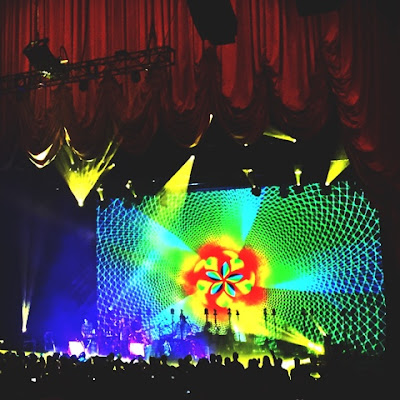 Currents, the third album from Australia's Tame Impala, finds the band leaning more on heavy synths than extravagant guitar, and brought them to the legendary Radio City Music Hall to help usher in a definitive moment in the band's career.

Tame Impala is a band, yes. They have five members that play guitars, drums, bass and keys, but their sound is really the extensive work of their mastermind leader Kevin Parker. As the sole brain of the operation (he writes and records the music himself), Parker has armed himself with an incredible band to carry out the fruits of his labor. On stage, their chemistry bubbles to fruition and lets their songs breathe and fill their (newfound) giant space putting forth tremendous amounts of confidence and enthusiasm. Hidden behind layers of smoke and perhaps the best visuals currently in production, Parker kept his vocals low in the mix and let the dense and hypnotic psychedelic vibes reign supreme. A deep fog slowly rolled forward from the stage, encasing the crowd as brilliant patterns of light swirled behind the band. As the evening progressed, the band took the crowd on a magical tour of their splendid discography. A super heady "Let It Happen" segued into a sparkling "Mind Mischief" and set forth a remarkable tone for the evening. Selling out Radio City is no small feat and when the band unleashed "Elephant" the room went into hysterics proving their worth as one of the most solid rock bands in the indie universe. A bonafide stoner rock anthem, the song climaxed in a relentless drum solo showcasing the band's phenomenal ability to flex their sound. Their jams can unwind into loose, breathy renditions before being snapped back firmly into place. "Eventually" was an ultra deep groove that was relaxed yet focused and the hyperextended outro really saw the band unfurl their true talents. Blending a solid mix of their records, the encore of "Feels Like We Only Go Backwards" truly reeled in the magic of the night. Overjoyed, the audience took control of vocals duties while the band let go of all their cares, blissfully executing a mind bending experience. Not too long ago, Tame Impala seemed like another band buried in the sonic realm of the 70s. Tonight, they emerged as a defining band of the moment.