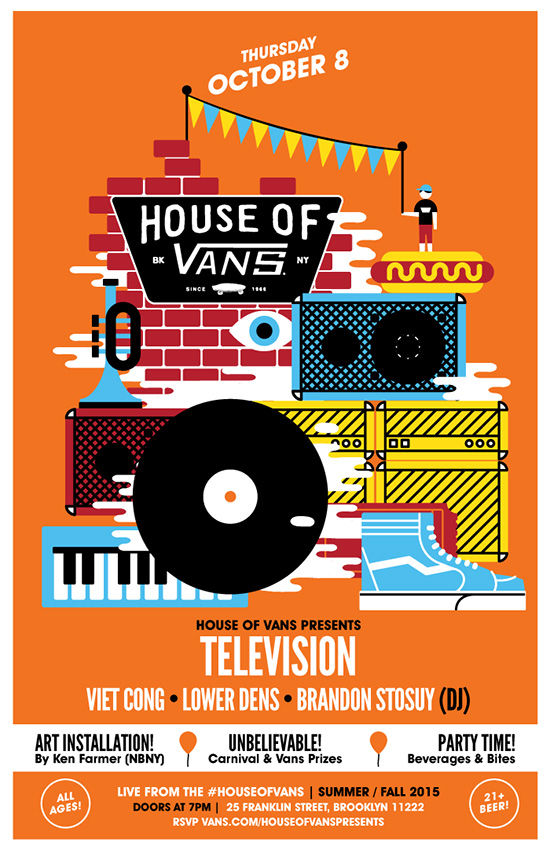 House of Vans does a terrific job of curating free shows in Greenpoint. The lineup of Television, Viet Cong, and Lower Dens was one of their strongest to date.


After recently headlining Bowery Ballroom, Baltimore's Lower Dens were on first to open the evening with beautiful dark vibes. Their dream-pop sounds felt a bit strange in the cavernous warehouse space and some slight feedback issues punched holes through their otherwise tight set. Still, Jana Hunter led the band with vibrant energy and passion raising the bar from the week prior and exploring new territories of pop melodies that easily blur the line of masculine and feminine dominance. One of the year's best songs, "To Die in LA", was even stronger this evening with Hunter's vocals hitting hard as the band did their best to defy genres and styles creating a sound all their own, their brooding synth-noir setting a great stage for the rest of the night ahead.

Viet Cong have been under a lot of fire lately for their perhaps offensive name, but that didn't stop the quartet from blasting through a high power set. Their radical post-punk nature of deeply entwined guitar work seemed like a logical choice to come before Television and their lean towards abrasive feedback and clamor struck a deep chord with the crowd. However, unlike their show at Mercury Lounge this past winter, the band were a little off. Their sound a bit muddled and their vocals rather shot, but the band did their best to keep the show together. "Bunker Buster" off their awesome debut record was as thunderous as expected allowing the floor to drop out midway through and provide the band with the opportunity to throw caution to the wind blasting their way forward. They concluded with an especially epic "Death" that carried on like a behemoth letting the band prove their almighty worth.

Television's Marquee Moon is a quintessential record of punk, the 1970s and New York City. An unofficial soundtrack for the city that never goes out of style. It's hard to think of another band as vital to the city's raw Bowery scene in the 70s that still operates in general, let alone at this scale. Verlaine is still an absolute wizard on the guitar, every note played with sheer perfection and timing, an unbelievably underrated virtuoso that spawned dazzling works of free-form punk. Icons of the proto-punk era, the band's tracks are classics that paved the way for countless indie rock bands and the garage rock revival of the early aughts. Matching the guitar drive of the Velvet Underground with the art-rock tendencies of the Talking Heads, Television were true pioneers of their sound. Their dueling guitars were immediate and intense, never providing for a single dull moment. Only "Prove It" and "Guiding Light" off Marquee Moon made the set list, and the rest of the night was comprised of sprawling guitar solos. Even though some of the extended jams didn't seem to fit the crowd's expectations, watching Verlaine was an absolute pleasure and thrill, a true classic before your very eyes.
Posted by marc at 12:27 AM