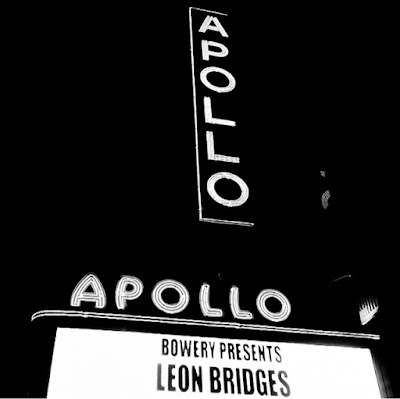 Harlem's Apollo Theatre is one of the city's most iconic venues and rising sensation Leon Bridges dropped by for a legend in-the-making performance.

Just about a year after dropping his debut single, Leon Bridges has steadily been climbing the ladder of fame. Graduating from small cafes in his hometown of Ft. Worth, Texas, Bridges signed to Columbia Records for his gorgeous debut album Coming Home, a record indebted to vintage Motown grooves. On stage, Leon exudes brilliant energy and his retro-soul sound a fresh breathe of fresh air in a time when many others have tried much too hard to recreate an unwanted era. Leon's swift dance moves to classic doo-wop pop evoked similar nostalgia as Mad Men, a perfect homage and never distasteful. Armed with a stellar band that not only matched his killer style but also accentuated his every move, Mr. Bridges put on a truly tremendous performance that featured numerous unreleased tracks as well as tons of crowd pleasers. "Twisting and Groovin'" and "Smooth Sailin'" were smash hits that lifted the crowd to their feet as deep hues of red and purple lit the stage behind the band. It was electric and on lock, everything falling right into place while still allowing the music to breathe. Forever gracious and humble, he thanked the audience every chance he got and seemed truly in awe of the moment. He dedicated "Lisa Sawyer" to his mother who was in attendance and acknowledge his sheer and utter disbelief that just two years after writing these songs in his bedroom, he'd made his way to the almighty Apollo. "Coming Home" received more rapturous applause, but it's no question that "River" was the crown jewel of the night. Left with only his backup singer on stage, the audience was silenced as the raw and powerful song took over the theater. It was an awe inspiring moment from the young singer and showcased a man with the utmost potential, poised for greatness.