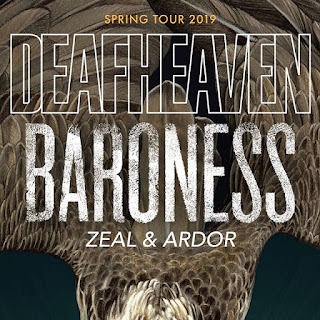 Deafheaven brought the heat as they wrapped up their tour with Baroness at New York's Terminal 5 on a rainy Friday night.

Still supporting last year's excellent Ordinary Corrupt Human Love, Deafheaven stormed into New York with a fiery set of explosive material and appeared to have more fun than any other performance they've put on in this city in the past five years. Erupting with "Brought to the Water" from New Bermuda was a rush as the pitch black room jolted to life with bright white lights as soon as the riffs kicked the song into gear and the energy only continued to sky rocket for the rest of the show. Their latest single "Black Brick" was a thrashing number and one of the hardest tracks in their repitoire leaning much more to thrash and speed metal and further from the shoegaze trademarks of their past. Still, the song molded perfectly into their setlist and was without question the intense peak of the night. "Honeycomb" and "Canary Yellow" saw the band's alt-rock extremes shine through and made for some of the biggest moments of the night. I can't think of another metal band that could so beautifully incorporate a giant mirror ball into the middle of their set. Playing a tad slower than on record and with singer George Clark's eccentric frontman tendencies, it felt more dreamlike and expansive, more full of sublime beauty than ever before and as the chorus of the later track came to fruition, pure euphoria began to take over the room. The only challenge that plagued the evening was the venue itself and the usual sound difficulties made some of the evening more muddled and full of bass that over powered the roaring guitar lines. Even with the mixing issues, Kerry McCoy played with more swagger and style than any of his past performances. Usually rather still and stoic, he moved all across the stager with such a presence, fully accentuating each track to add to the band's absolute grandeur. With two songs left in the set, the band dove into their classic Sunbather. A song that still feels alive with new energy, it soared and surged with power, an absolutely driving moment. Everything culminated with the utterly astonishing "Dream House" which saw the band at their pinnacle. It's hard to think of another song from the past decade that fills me with the rush of bliss that flows as the opening guitar lines pours out of the speakers. Hearing it live still sends shivers down my spine and it's still of the greatest live moments in modern music.