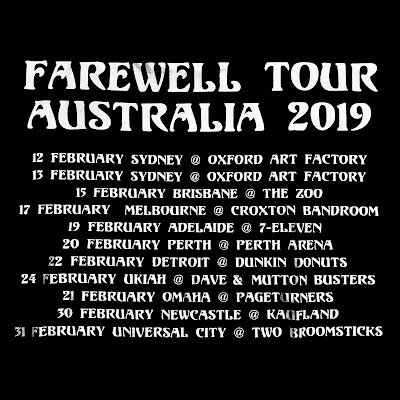 On her first ever Australian tour, Phoebe Bridgers played to a packed house in Melbourne like she's been at it for years. A true star rising to promise.

Taking the stage to "Iris" by the Goo Goo Dolls, Bridgers played an intimate and heart-wrenching set of emotional ballads led by her stunning voice and stellar songwriting skills. Without even addressing the audience, she started things off with "Smoke Signals" and for the rest of the night, she held the crowd in the palm of her hand, everyone hanging on every note and word she spoke. The crowd was utterly silent and barely a phone was raised to take a snapshot of the majestic singer. As the night progressed, she eased into things and started to crack some jokes to lighten the mood, otherwise her natural, sad songs really drove home the emotions for the evening. "I wrote this song with my friend Conor Oberst" she said before playing "Chesapeake" off the duo's recent record, Better Oblivion Community Center, adding a nice treat to the set in addition to a cover of Gillian Welch's "Everything is Free" which was written about Napster, but now "applies to how we consume music as a whole" she claimed. Perhaps the best part of the night, however, came when she talked about losing her dog just before heading out on tour and how she was happy she was able to write him into one song before he passed. "I wrote this one with my boy band" she announced as she strummed the opening to the epic "Me and My Dog" from last year's triumphant boygenius EP. While she didn't have her friends Lucy Dacus or Julien Baker behind her, the acoustic rendition was just as emotional and powerful as the one recorded as a trio and was without question the pinnacle of the evening. As the night began to wind down, Phoebe was a bit more talkative behind the mic and opened up to the crowd. "This is a new song. It's dark, sad, and about five minutes long. Record labels love me!" she proclaimed as she embarked on another somber number. "What's the song called?" a fan yelled out. "I don't know yet. I've always wanted to write a sequel. And by always, I mean since, like, yesterday haha. Just a song called 'two'" Bridgers said, lightening the mood. Strangely enough, while her songs are often heartbreaking, her banter is jovial and several times she had to stop and start again do to laughter between her and her band. It's been a crazy week for Bridgers. Just days ago, the New York Times included her and several other women in an article calling out Ryan Adams for his inexcusable and disgusting behavior towards women, an all too common occurrence in the music industry, and Bridgers used her spotlight to address the issue in front of the nearly sold-out crowd. "We need to be comfortable being called out and we need to be comfortable calling out our friends. It's not always black and white toxic problems. If someone starts dating a sixteen year-old, say something about it and don't just pretend it's OK. Anyway, this song is about someone I truly hate." She then played "Motion Sickness," a song that has taken on a whole new meaning (for yours truly at least) and sealed the night with a definitive and powerful statement.
Posted by marc at 9:10 AM