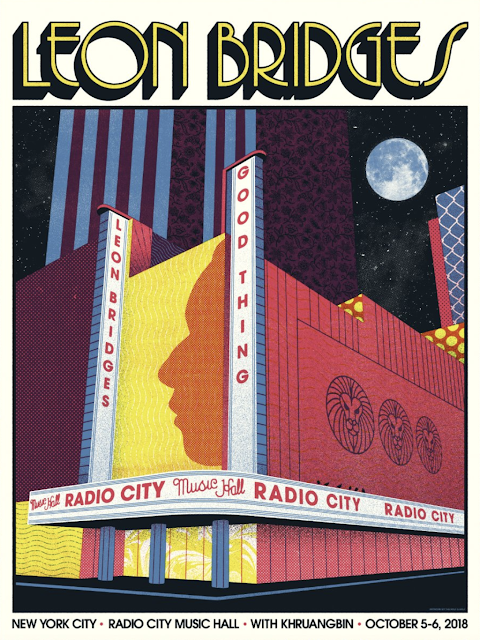 
As the curtain rose and the remarkable theatre began to cheer with excitement, Leon Bridges strutted out on stage back with a big band and his initials blown-up in a stunning light display. His Good Thing Tour is his first major headlining trek across the country and the singer was making every attempt to step into the spotlight and embrace his stardom. He's come a long way from singles appearing online in 2014 with barely any social media or internet presence and it has been inspiring to watch his rise to fame over the past four years. It's clear that while he has grown tremendously and is beginning to find his groove, he still has a bit of nerves to shake, but that did not stop him for putting in full energy to make the night as memorable as possible. His voice crooned over soulful jams and his recent direction has added some more modern twists to his retro vibes. After kicking the night off with two tracks from his latest record, he told the band that "New York might not be ready for this new stuff, let's play something from the first album" and launched immediately into "Better Man" which got the crowd swaying along and really began to make the night come alive. Shortly after, he broke out his classic track "Coming Home" and got the audience on their feet as he danced all over the stage and reminded everyone that before he got his knack for writing songs, he started off dancing in bars to Ginuwine's "Pony." He segued beautifully into the newer "Beyond" which is without question the best track from the new record and live onstage, it was a new level of magic and purely sublime. It was his most dignified and impressive moment of the evening and finally allowed him to display a level of confidence and glamour that could take him to the next level of his career. "Forgive You" was another stunning track and watching him dedicate "Lisa Sawyer" to his mother was heartwarming. The encore began with Bridges walking stage with a guitar in hand and effortlessly started strumming out "River" and brought the city to its knees. It was a heart melting moment filling the acclaimed hall with radiance and grace. He finished off the night by running up the sides of the theatre and into the mezzanine during "Mississippi Kisses" and took one final shot at capitalizing on his rising fame. It was an inspiring night and showcased a star on the rise, hinting at what brilliance may still be ahead.