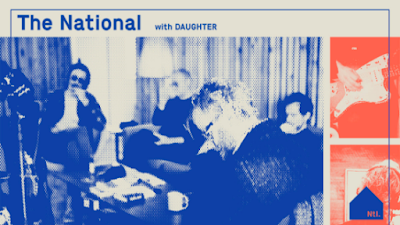 The National released their seventh full-length, Sleep Well Beast, this past September and brought their latest tour through Queens in support of the record.

Over the course their career, the National have become a steady, reliable source for melodramatic music that feels ominous, powerful, and wrought with emotional lyrics that amplifies their somber sound. Playing a heavy set of tunes off their latest record on a gorgeous night in Queens felt like a majestic setting for the band and perfectly captured their melodic tendencies. Their stage set-up was impressive and encapsulated their rise to indie-rock upper echelon. Video screens surrounded the band to make the night feel a bit more intimate and Matt Berninger pushed the excitement up a notch with his prominent crowd interactions. For a band who never really deal out arena-ready choruses or mega-riffs, they still find a way to dazzle with their instantly recognizable hooks and sensational one-off lyrics that ripple through the crowd and find a way to make the music seem a bit more tangible. New anthem "Turtleneck" was without question the most rocking part of the night and provided one of the heaviest moments of the band's catalogue. As they pulled out more of their classic tracks, the night really livened up and they really hit their stride with songs like "I Need My Girl" and "Secret Meeting" (the latter which was dedicated to Jared Kushner). More than anything, it was "Bloodbuzz Ohio" that really steered the night in a new direction and saw the band rise to the top of their game. "Fake Empire" (one of the best opening tracks in the past decade) was a stunning moment of elegance and beauty and their encore was top notch. As part of this tour, the band has been playing covers by artists local to the city their playing and Queens got the hear a very National-esque version or the Ramones classic "The KKK Took My Baby Away" which came as a bit of a surprise, but felt magical nonetheless. However, it was the finale kicking things off with the stomping "Mr November" that really sent the night into overdrive. Following that, Berninger jumped into the crowd and made his way all the way to the back of the stadium while delivering an unforgettable performance of "Terrible Love" which sent the crowd into near euphoria. As the 10:00 venue curfew approached, the band played one last number, an all acoustic and microphone-free version of "Vanderlyle Crybaby Geeks" which was sung entirely by the crowd. It was a rather unusual but altogether surreal and beautiful moment that swept many off their feet. The National have never seemed like a giant band and perhaps they would've actually benefited from never playing massive rooms, but instead sticking to smaller clubs and theaters as their music has always felt rather personal and not something that begs to be shouted back from the rafters or a balcony, but they engaged their crowd with serious purpose and delivered a stunning show that proves their climb to the top is not a fluke, but rather a compliment to their long and storied career.

Email ThisBlogThis!Share to TwitterShare to FacebookShare to Pinterest
Labels: The National