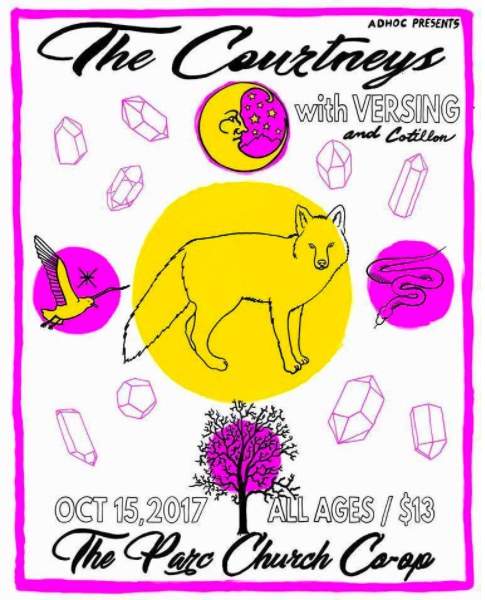 Cruising along behind their great sophomore record, the aptly-titled II, Vancouver's The Courtneys came to Greenpoint's Park Church Co-op for a fantastic set on a crisp autumn night.

The band's sound is that of what you might expect from a band signed to the famed Flying Nun label out of New Zealand. Their jams are comprised of instantly catchy hooks, full of fuzzed-out guitar riffs and power-pop choruses oozing with sugary-sweet harmonies. A tight-knit rhythm section helps the trio stay locked into gear as they plow through their perfectly crafted two-three minute pop songs full of longing and endless joy. Singer/drummer Jen Twynn Payne firmly leads the band through their charged-up set as the only real Courtney of the group slams on the distortion to bring strong, shoegaze tones to the group's solid sonic make-up. Park Church Co-op was a wonderful setting and allowed the band's tremendous sound to fill the space with a rich and warm tone that was heightened by the basking yellow, orange, and red lights that wrapped the band in a protective blanket that aided the lush grasp of their dream-pop sound. On stage, they definitely veer more towards the punk side of their aesthetic and embrace the more ramshackle side of their indie influences, the reverb swallowed the venue whole and their sharper produced moments felt washed out in a sea of echoing guitar. It was much more of an overpowering experience than on record and the crowd immediately felt the need to get on their feet and into the aisle, resisting the pews at all costs. Their compact tracks sprang to life and swelled to new heights without ever losing direction. It was a strong display of their ability to unleash their power and allow the songs to grow and take on a larger dimension live. The band still kept their raw composure throughout the night and it was exciting to see so much potential from such a fresh, young band. II is shaping up to be one of the best straight-forward rock records of the year and it's not something to be missed.
Posted by marc at 12:13 AM

Email ThisBlogThis!Share to TwitterShare to FacebookShare to Pinterest
Labels: The Courtneys