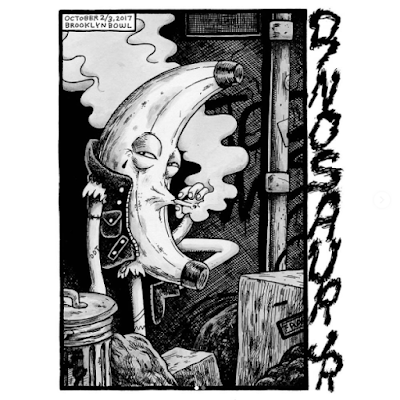 Dinosaur Jr played their first of two nights at Brooklyn Bowl with support from Easy Action. Despite the lack of a new album to promote, the always thrilling trio still ran through the classics for a night of high pumping rock and roll.

For over three decades, Dinosaur Jr have been a total force in the college-rock/hardcore/punk scene and living legends for those that aspire to age gracefully while still retaining the attitude that comes with the sonic landscape. Combining 80s hardcore with the more melodic sounds of underground radio that permeated the dorm rooms and coffee houses of Amherst, MA throughout the late 80s and 90s, Dinosaur Jr have forever been the godfathers of massive guitar solos and an undeniable rhythm section that, on paper, it's unclear how they never really came to dominate the scene. Taking cues from across a wide range of influences, the band has always sounded distinctly their own; each track embedded with their DNA in amber or a perfectly locked down beat. On this particular occasion, the band drew from across their career to deliver an absolute knock-out performance. Per usual, J Mascis ripped through solo after solo and tore through his guitar conjuring up gale-force like moments of controlled chaos, allowing for him to demonstrate his mastery of not only the instrument, but his band as well. It's without question that after years of playing together, their reliance is fundamental, but never taken for granted. J, Lou, and Murph all shift the dependence of each track to allow for each member to unleash their potential, but never does the song become out of control or over the top. As is common with many of their shows, the set featured the usual favorites of "I Feel the Pain," "The Wagon," and "Start Choppin'" (all from the solo Mascis era of the band), all of which generally see the largest reaction from the crowd. Of course, it's the deep cuts like "Freak Scene" that truly make the night and inflict the deepest point of nostalgia amongst the crowd. By now, the reunited Dinosaur Jr has outlasted the trio's original run and it's still exciting to see them play a song like "In a Jar." Despite the tracks being written essentially as solo material by J, hearing the original trio take on his later work is an improvement over the recorded versions and it's obvious just how much these guys belong together and are destined to make music forever. Even the newest tracks can't be mistaken for anyone else. Finishing with a cover of the Stooges' classic "TV Eye," the band brought Easy Action / Negative Approach singer John Brannon on stage to take lead vocals and send off the night with a final, demonic moment. Since reuniting in 2005, Dinosaur Jr has toured annually and released new music on a fairly regular schedule. It's a true testament to their creative abilities.
Posted by marc at 1:11 AM