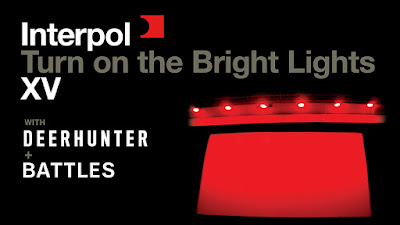 To celebrate the fifteenth anniversary of their debut album Turn on the Bright Lights, Interpol played the classic, in full, with all-star support from Deerhunter and Battles.

After a delayed start, Battles were first to take the stage as part of a stacked line-up on a beautiful evening in Queens. Though their time slot was short, the band wasted no time by kicking things off with the euphoric "Ice Cream," a track that immediately got the crowd moving along to the group's boisterous and infectious rhythms. Their excessive, experimental freak-outs congeal perfectly to reveal surreal moments of positively stunning jams full of complex melodies and tight grooves. Watching drummer John Stainer hit his hyperextended cymbal and keep such a locked beat is a true joy and sight to behold. While they have no real leader or frontman, it feels clear that his position on stage, front and center, is a clear power move and allows for his dynamics to be the true spotlight of their set.

Next up, Deerhunter slowly eased into their set with the hazy one-two combo of "Cover Me (Slowly)" and "Agoraphobia" which gave a heady preview to an otherwise lush and rather upbeat performance. Operating as a six-piece band, Bradford Cox lead them through a well-balanced set of hits from across their fantastic discography. "Rainwater Cassette Exchange" and "Living My Life" were downright bubbly numbers and given new life onstage taking on a new image as the brighter parts of the band's catalogue. The later was probably the funkiest moment of the entire night and sent a pulse of rhythm throughout the crowd igniting the arena in dance bliss. Of course classics like "Helicopter" and "Desire Lines" from their phenomenal Halcyon Digest sounded as great as ever and captured the band's jammier and more shoegaze-y moments of the night. It was encouraging to see the band play with such excitement and reinvent some of their older material for the stage. Hopefully a sign that new music might be on the way.

Even with fantastic openers like Battles and Deerhunter, it was clear that the night belonged to the hometown heroes of Interpol and hearing their debut played from start to finish was a stunning example of how a band can release one perfect record and still be worshiped by their fans for years to come. Perhaps it felt even more special to be celebrating this album in the wake of this summer's essential music reading, Meet Me in the Bathroom by Lizzy Goodman, which chronicles the New York City music scene in the early 2000s, of which Interpol were obviously major contributors. Personally, I will always be a Strokes fanatic through and through, however Turn on the Bright Lights was another critical piece that helped transform my love of music into an obsession. I will admit that it was "Evil" off Antics which really got me into the band to begin with, but I've since learned the importance and haunting beauty of TOTBL and all the glamor that comes with it. While the Strokes had their ragged rock and roll personas, Interpol were the sharp-dressed men who were far more intimidating than their peers and appeared more like vampires who stalked the Bowery at 3 AM than rowdy rockstars high on every drug under the sun. Fifteen year later, the record still stands as not just a testament to an important time for New York music, but a hallmark for a certain sound and era that continues to resonate with new listeners. Opening an album with "Untitled," "Obstacle 1," and the ever poignant and graceful "NYC" is such a stunning feat and hearing it all come to life was something never to forget. The band barely uttered a word between songs other than to introduce each other and thank the city they've long called home. As time has progressed, Interpol has never been able to recapture the glory of their debut, a fault that also hit the Strokes, but for this show, it was the lightning-in-a-bottle magic of that first record that reminded everyone as to just why this band still feels so special all these years later and how a record of this magnitude can truly stand the test of time.
Posted by marc at 11:52 PM