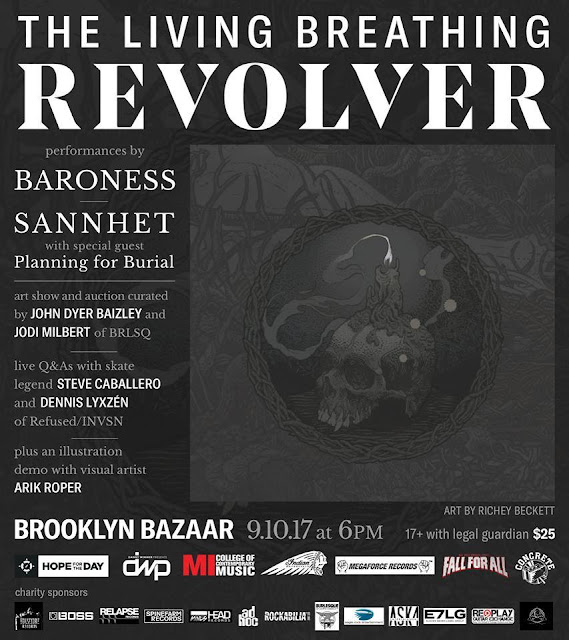 To celebrate the relaunch of music magazine Revolver, the mighty Baroness and the best band in Brooklyn, Sannhet, crashed into Brooklyn Bazaar for a night of powerful music. In addition to promoting Revolver, the night also doubled as a benefit for mental health and awareness for National Suicide Prevention Day.


Brooklyn's Sannhet are fresh off the release of their latest record, So Numb, and while all of their albums tend to encapsulate their unique dynamic, live shows are still the band's most valuable assets. With a new record under their belts, the trio has upped their lighting production and despite the small constraints and low ceilings of Brooklyn Bazaar, the band was still able to play to their strengths. Drums front and center, the band delivers soaring instrumentals that lend them to the harsh tones of music and even without vocals, they're often still categorized as a metal band. So Numb, however, finds the band moving into more of a mixed territory that has allowed the band to explore further sounds without jeopardizing what they already do so well. Adding in some electronic drum textures has given the band a more industrial-like approach to their sound, but forceful and wailing guitars are still at the trio's core. Drums pummel and the bass keeps everything firmly locked into place and the addition of Planning for Burial gives the new tracks an extra boost live and really brings their sound to another level.

Kicking off their set with a raging version of "Kerosene," Baroness wasted no time giving the audience exactly what they wanted: a raw, visceral set of surging choruses and monstrous riffs. The sludge metal heroes have traversed a long and twisted path and these days leader John Baizley is the only original member still in the band. Nevertheless, the new additions to the crew carry on the band's larger than life sound and their headlining set proved that their ability to deliver an awe-inspiring and heavy show was still undoubtedly within their grasp. It was a euphoric and triumphant performance from the band as Baizley never let the smile disappear from his face, it was clear that he was loving every moment on stage making comments that metal doesn't have to be all gloom, it can be inspiring and emphatic as well. Song after song, the crowd would join along and fire right back at the band, shouting along to every word in every song. Baizley's deep howl was impressive and not once did he falter in his delivery even as the crowd overpowered him in terms of volume and emotion. The room exploded with passion from the moment the band took to the stage and the intensity carried through for the band's entire performance. It was a rousing and raucous evening full of chugging guitars and extreme vocal deliveries, but never once did it feel overwhelming. In fact, it was a rather unifying experience. The bond between the fans and the band was apparent and the joy that stretched from the pit to the stage was genuine and pure. It was clear that this was a special evening for the band and those in attendance knew that this was something special. As the encore began, Baizley took to the mic to thank those who had organized and planned the event and gave acknowledged that the purpose and benefits of the evening were truly what was making the evening so meaningful. In times of panic, uncertainty, and hostility, it's important to take a step back and find peace in what's going on around you and for those in the room for this show, it was clear that this was something that let people escape the madness of the world around them and find joy on a Sunday evening. Metal music often gets the label of intense, violent music that highlights gore and brutality, however tonight made it more clear than ever that it can create a powerful bond that allows people to find solace in the mayhem and inner-peace.
Posted by marc at 12:36 AM