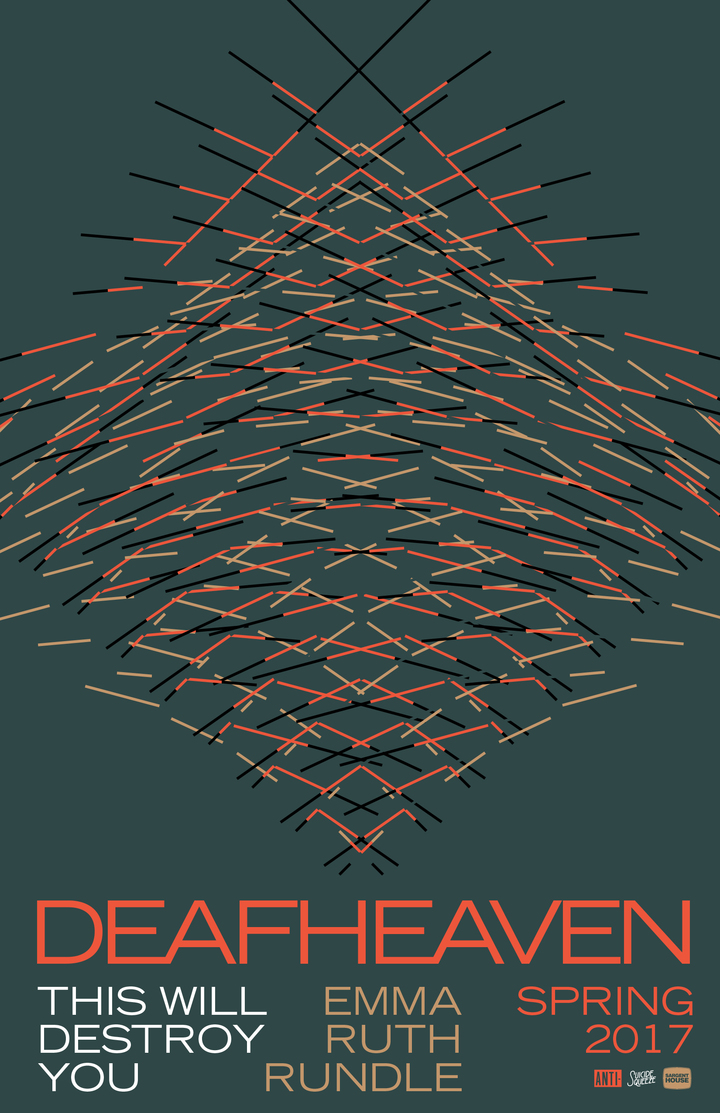 The "blizzard" known as Stella for some reason halted New York City on Tuesday, so Deafheaven stuck around an extra day to blow the roof off of Warsaw in Greenpoint.


Deafheaven seem to have gotten a raw deal. Rising in the indie music scene, they've been the poster-band for people who want to listen to metal, but don't really like metal and in the metal scene, they've been viewed as posers. Perhaps it's because pinning down their music into one specific genre is nearly impossible. Sure, metal is their driving force, but their songs are equals parts indebted to shoegaze and post-rock. Whatever you choose to label them, one thing is for sure, they fucking rock. Since releasing their critically acclaimed Sunbather in 2013, Deafheaven have gained an uncanny following and seen their names rise towards the top of festival posters around the world and none of their praise has been overrated. Their brilliant intensity is on par with the best and their capability to elegantly slide into etherial soundscapes from blast-beats is practically unmatched. Sure, there are plenty of other bands that have been given the black-gaze label, but none have been able to capture the same success as Deafheaven. Their show at Warsaw in Greenpoint was nothing out of the ordinary for them and once again confirmed their place as my favorite band making music today. Kicking things off with "Brought to the Water", the band played a great setlist featuring highlights from across their stunning career. On stage, the band operates with total force and purpose never relinquishing their power over the crowd. Front man George Clark is an incredible frontman taking to the stage like a predator stalking his prey. His calculated hand movements, stage dives, and hair flips accelerate the vibes of the show leaving the crowd hanging on his every move as guitars blaze behind him with absolute fury. His connection with the crowd and seems genuine beyond compare. He reaches out and grabs the hands of as many fans as possible and stage dove into the audience on several occasions while the rest of the band carries on with excessive force. After three hits from New Bermuda, the band moved into their older territory, breaking out material from Roads to Judah as well as their cover of Mogwai's "Cody." "We usually save this song for last, but I want to play it now" George barked at the crowd as the band blasted into "Dream House." Years after the release of Sunbather, the opening track still sends shivers down my spine and hearing it live will never get old. The stunning guitar work and absolutely monstrous drumming create the ultimate sensation of euphoria and sense of wonder. However, tonight the spotlight went to the album's self-titled track and as "Sunbather" poured out of the speakers, an already intense crowd pushed things over the edge. It was a beautiful night of heavy, intense, and blissful music that carefully balanced between total chaos and ultimate serenity. Deafheaven's music has the unique capability of drawing inspiration from so many avenues that the culminating sound results in pure nirvana. They're a band that many could easily reject because of their metal associate, but anyone following that path is really doing a disservice to themselves.