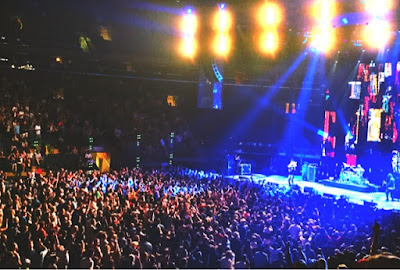 The Stone Roses played their first NYC show in twenty years and first with their original line-up ever. It was madness.


Their reunion train has been running for three years now, but aside from their Coachella appearance, they've been absent from the states. Even in their initial run, the band didn't cross the pond until after their sophomore record and it was post-split with Squire and Reni. For many, this was a lifetime in the making and a moment others never thought would come true. People traveled from Minnesota, Toronto, and Dublin for this moment and the pay off for everyone in attendance was tremendous. As the lights came down on a jam packed Madison Square Garden and the opening of "I Wanna Be Adored" rang out, pandemonium erupted. "I never thought I would hear this song live" shouted one person and the collective cheers agreed. While they were years ahead of the Brit-Pop craze, the Roses never reached the acclaimed heights of Oasis or Blur here in the states and the madchester scene in general never really translated over in America. Still, hit after hit brought more and more insanity and watching the crowd react to every one of Ian Brown's lyrics was a real treat. The entire night was electric and their abilities to merge groovy rhythms with lush guitar is still a stellar aspect of their music that brought the early nineties back to life. "This is the One", "Waterfall" and "Shoot You Down" we're epic rock anthems and their magnitude rippled across the arena. Squire's paisley wah-wah fueled guitar solos, Mani's subliminal bass lines, and Reni's bombastic drum fills swallowed the crowd and presented seamless versions of "Made of Stone" and "She Bangs the Drums" which turned the Garden into one massive sing-a-long. The thought of hearing these songs in the early nineties ring out over a festival crowd in England almost seems too good to imagine given their explosiveness nearly thirty years later. Of course their notorious break-up only fueled speculation that these shows were a mere cash grab, but the intensity in which they performed quickly dismantled those thoughts. They catered to their long waiting North American fans by playing every track off the classic debut and even their new track "All for One" sounded a little better live. Their signature Pollock-styled paint drippings came to life behind them as they played nearly all of their masterful debut and when they finally brought the house down with "I am the Resurrection" it was a genius finale for an unbelievable night. Hearing all of Madison Square Garden belt the chorus isn't a moment anyone in the crowd will soon forget and seeing the band hug onstage made the night all too special. For a band that notoriously self imploded in their hey-day, this show was nothing short of legendary.

"I Wanna Be Adored"
"Elephant Stone"
"Sally Cinnamon"
"Mersey Paradise"
"(Song for My) Sugar Spun Sister"
"Bye Bye Badman"
"Shoot You Down"
"Begging You"
"Waterfall"
"Don't Stop"
"Elizabeth My Dear"
"Fools Gold"
"All for One"
"Love Spreads"
"Made of Stone"
"She Bangs the Drums"
"Breaking into Heaven"
"This Is the One"
"I Am the Resurrection"
Posted by marc at 12:42 AM

Email ThisBlogThis!Share to TwitterShare to FacebookShare to Pinterest
Labels: The Stone Roses