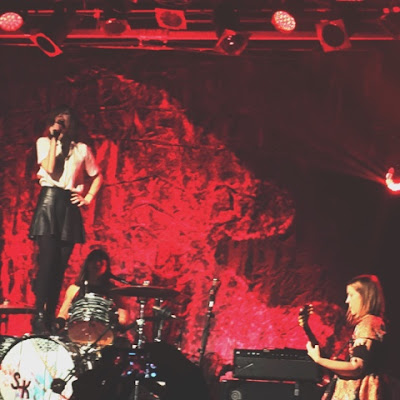 Ten years after their last record, Sleater-Kinney came rushing back with a new record and subsequent tours. To wind down the year, they're playing a run of five sold out shows across the city.

What a year it's been for this band! They reissued their entire discography, added to that a stellar come-back record and threw down the gauntlet as one of the best live bands in existence. The three piece picked up just where they left off ten years ago with explosive riffs, catchy choruses and a no-fucks-given attitude. It's a rare case where if the band played only new songs on this tour, people wouldn't be that mad. On first listen it was legit to question whether No Cities to Love was perhaps their best work yet. It's probably not and that's not to discredit this record or anything from the past, the band is just that consistent and great overall. Corin's epic wail, Carrie's brilliant energy, and Janet's steadfast beats are unparalleled. The trio is still an unruly force that commands dire attention. Their urgency is delivered with such sincerity that the crowd awaits each note with baited breath. The vocal range of Corin really cannot be emphasized enough and as the night progressed her voice only enhanced. Not a single blemish or missed mark derailed her talent. Behind the drums, Janet fucking Weiss kept the band locked together and on track. A loyal devotion of fans behind her, a cry of "Janet for President" was met with a similar reaction as their plethora of hits. Corin Tucker really carries out lead vocals, but during the bands hiatus, it was Carrie Brownstein that rose the pop culture ladder with her co-star status in Portlandia and supporting role in (the everybody should be watching this) Transparent. On stage, the band is in perfect balance, tandem vocals never outshining their phenomenal musicianship. As the night carried on, the electricity intensified. Brownstein's high kicks and windmill guitar strokes adding high performance value, Tucker's vocals speaking words of truth and, again, Weiss slamming down daunting fills executed with ease. For "Entertain", Brownstein ascended to the top of the drum kit leading the crowd in a resounding singalong for a true highlight of the night. The encore saw Fred Armisen join the band for an eccentric and spot on cover of the B-53's Classic "Rock Lobster", complete with plenty of cowbell. "2016, the year of wigs" proclaimed Tucker as she donned one in neon pink. "Well then this song is for you" announced Carrie as the band launched into a perfect "Modern Girl". Hearing a room full of people cry out "my whole life is like a picture of a sunny day" with Weiss on harmonica sent shivers done spines. The night was capped off with the holy "Dig Me Out", the audience echoing along in grand fashion cementing their renaissance and status in rock.